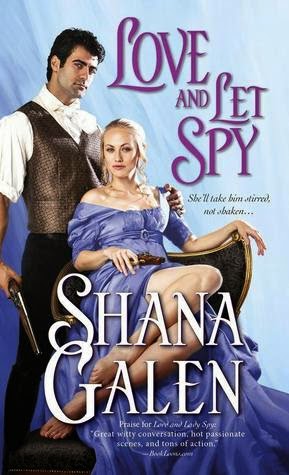 Her name is Bonde, Jane Bonde . . .A beautiful and eligible member of the ton, Jane has more than a few secrets: she’s one of the Crown’s most elite agents. She may be deadly, but she doesn’t know a thing about fashion, flirtation, or love . . . until Dominic Griffyn shakes up her carefully stirred world and asks her to be his bride. He’s exactly the kind of man she’s not looking for. And he’s dangerous, because falling into his arms is so much more satisfying than saving England from her enemies.He’s an improper gentleman who needs a wife. . .Tall, dark, and tortured, Dominic Griffyn is haunted by demons from his past. When his stepfather insists that he marry, Dominic allows himself to hope that the beautiful but mysterious Miss Bonde might help him forget his troubles. As they grow closer, it’s clear that there’s more to Jane than danger. She might be just what his neglected heart needs.

Dominic drank his tea. “You imply that if I laid eyes on her, I would change my mind.”
“Probably not,” Carlisle mumbled around the bread. “But you’d think twice.”
Dominic set his teacup down. He was beginning to think it a good idea to escape while he had the chance. “I doubt we have the same taste in women.”
“She is every man’s taste, I assure you. Are you leaving?”
Dominic was halfway across the room. “Yes, but I must say, Carlisle, you have intrigued me. I might have to see this Miss Bonde for myself.”
“There is a long line of men ahead of you.”
Dominic opened the door. “Give Lord Edgeberry my regards.”
“That ought to be a pleasant task,” Carlisle muttered. Dominic closed the door and started for the stairs. He hadn’t made it far before his mother stepped in front of him. She was petite, dark, and exotic with her Gypsy coloring. As far as Dominic knew, she was not of Gypsy blood, but she did nothing to dispel the rumors. He was a great deal taller than she. His father must have been a man of some height, for Dominic was a head taller than his stepfather and his three half brothers. But woe to the man or woman who equated height with power. Titania Griffyn—-now Titania Houghton–Cleveborne, Marchioness of Edgeberry—-was a force to be reckoned with.
“A word, my darling son.” She gestured toward her boudoir, where she met with her closest friends, and set off, not waiting to see if he would follow.
Dominic sighed and followed.
~~~
Elsewhere in Mayfair
It was never a simple matter to descend the facade of an edifice with no more assistance than that of the occasional ledge or outcropping that might be used in place of a hand– or foothold. Trying to accomplish such a feat while wearing a ball gown and the accompanying silk slippers made the task even more difficult. And, in Bonde’s opinion, it was an all but impossible commission when one was wearing gloves.

But she was determined. And besides, she had to make a good showing. Poor Lady Keating—-code name Butterfly—-was expecting her to act as an example. Bonde lowered a foot, searching for purchase, found it, and moved down the wall of the gray stone mansion.


The next excerpt will appear tomorrow on Urban Girl Reader

Pre-order Love and Let Spy:
Amazon:
B&N:
Apple:
Kobo:
IndieBound:
BAM:
Indigo:
I rarely swoon at blurbs, but this one along with the excerpt
made my heart beat a little faster.   Woof

Shana Galen is the bestselling author of fast-paced adventurous Regency historicals, including the RT Reviewers’ Choice The Making of a Gentleman. Booklist says, “Galen expertly entwines espionage-flavored intrigue with sizzling passion,” and RT Bookreviews calls her “a grand mistress of the action/adventure subgenre.” She taught English at the middle and high school level off and on for eleven years. Most of those years were spent working in Houston’s inner city. Now she writes full time. She’s happily married and has a daughter who is most definitely a romance heroine in the making. Shana loves to hear from readers, so send her an email or see what she’s up to daily on Facebook and Twitter.
Website
Twitter
Goodreads
Facebook
The Sisterhood of the Jaunty Quills
Blog
iTunes App