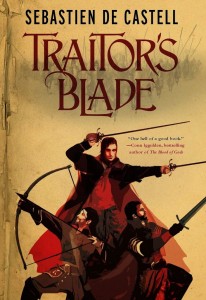 With swashbuckling action that recall Dumas’ Three Musketeers Sebastien de Castell has created a dynamic new fantasy series. In Traitor’s Blade a disgraced swordsman struggles to redeem himself by protecting a young girl caught in the web of a royal conspiracy.
The King is dead, the Greatcoats have been disbanded, and Falcio Val Mond and his fellow magistrates Kest and Brasti have been reduced to working as bodyguards for a nobleman who refuses to pay them. Things could be worse, of course. Their employer could be lying dead on the floor while they are forced to watch the killer plant evidence framing them for the murder. Oh wait, that’s exactly what’s happening.
Now a royal conspiracy is about to unfold in the most corrupt city in the world. A carefully orchestrated series of murders that began with the overthrow of an idealistic young king will end with the death of an orphaned girl and the ruin of everything that Falcio, Kest, and Brasti have fought for. But if the trio want to foil the conspiracy, save the girl, and reunite the Greatcoats, they’ll have to do it with nothing but the tattered coats on their backs and the swords in their hands, because these days every noble is a tyrant, every knight is a thug, and the only thing you can really trust is a traitor’s blade.

Excerpted from Traitor’s Blade by Sebastien de Castell.  Copyright 2014. Published By Jo Fletcher Books. Used by permission of the publisher. Not for reprint without permission.
‘I still can’t believe he can keep going like that,’ Brasti started up again. ‘I ask you again, Falcio, what are we doing here? Tremondi hasn’t even paid us yet.’
I held up my hand and wiggled my fingers. ‘Did you see his rings?’
‘Sure,’ Brasti said, ‘very big and gaudy. With a stone shaped like a wheel on top.’
‘That’s a Lord Caravaner’s ring – which you’d know if you’d paid attention to the world around you. It’s what they use to seal their votes when they have their annual concord – one ring, one vote. Not every Lord Caravaner shows up for the concord each year, so they have the option of lending their ring to another to act as their proxy in all the major votes. Now, Brasti, how many Lords Caravaner are there in total?’
‘Nobody knows for sure, it’s—’
‘Twelve,’ Kest said.
‘And how many of his fingers had one of those gaudy rings on
them?’
Brasti stared at his own fingers. ‘I don’t know – four . . . five?’
‘Seven,’ Kest said.
‘Seven,’ I repeated.
‘So that means he could . . . Falcio, what is it exactly that the Concord of Lords Caravaner is going to vote on this year?’
‘Lots of things,’ I said casually. ‘Rates of exchange, dues, trade policies. Oh, and security.’
‘Security?’
‘Since the Dukes killed the King, the roads have fallen into disrepair. The Dukes won’t spend money or men, not even to defend the trade routes, and the Lords Caravaner are losing a fortune on private security for every single trip they take.’
‘And we care about this why?’ 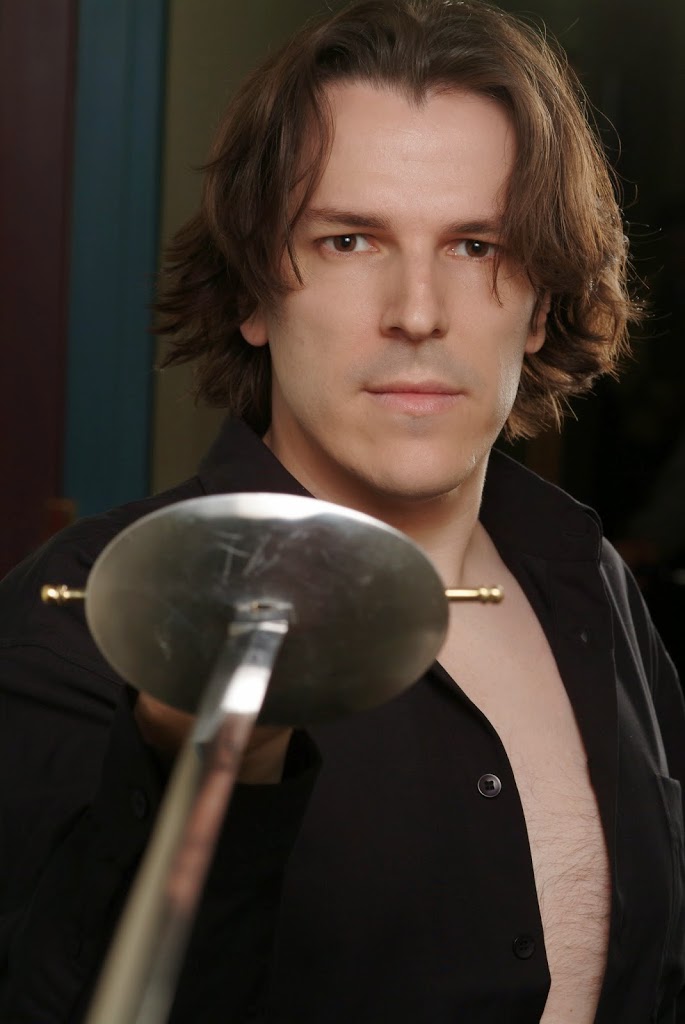 Sebastien de Castell had just finished a degree in Archaeology when he started work on his first dig. Four hours later he realized how much he actually hated archaeology and left to pursue a very focused career as a musician, ombudsman, interaction designer, fight choreographer, teacher, project manager, actor, and product strategist. His only defence against the charge of unbridled dilettantism is that he genuinely likes doing these things and that, in one way or another, each of these fields plays a role in his writing. He sternly resists the accusation of being a Renaissance Man in the hopes that more people will label him that way.Sebastien lives in Vancouver, Canada with his lovely wife and two belligerent cats.

WANT TO WIN THIS WONDERFUL BOOK?

Open to anyone with a US mailing address – PO Boxes OK!
Open only to those who can legally enter
Winning Entry will be verified prior to prize being awarded. No purchase necessary.
You must be 13 or older to enter .
The winner will be chosen by rafflecopter and announced here as well as emailed and will have 48 hours to respond or a new winner will be chosen.
This giveaway is in no way associated with Facebook, Twitter, Rafflecopter or any other entity unless otherwise specified.
The number of eligible entries received determines the odds of winning.
Giveaway was organized by BookHounds and sponsored by the publisher and me!
VOID WHERE PROHIBITED BY LAW.