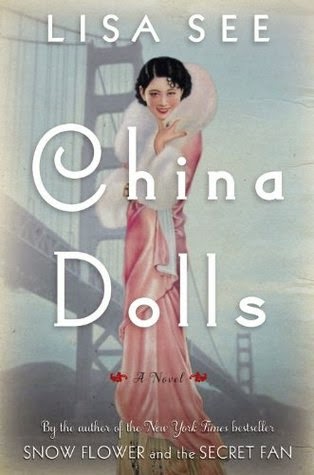 An exciting new novel set in the “Chop Suey Circuit” of San Francisco right before World War II, from the beloved bestselling author of Snowflower and the Secret Fan and Shanghai Girls.

In 1938, Ruby, Helen and Grace, three girls from very different backgrounds, find themselves competing at the same audition for showgirl roles at San Francisco’s exclusive “Oriental” nightclub, the Forbidden City. Grace, an American-born Chinese girl has fled the Midwest and an abusive father. Helen is from a Chinese family who have deep roots in San Francisco’s Chinatown. And, as both her friends know, Ruby is Japanese passing as Chinese. At times their differences are pronounced, but the girls grow to depend on one another in order to fulfill their individual dreams. Then, everything changes in a heartbeat with the Japanese attack on Pearl Harbor. Suddenly the government is sending innocent Japanese to internment camps under suspicion, and Ruby is one of them. But which of her friends betrayed her?

Lisa See is the New York Times bestselling author of Shanghai Girls, Peony in Love, Snow Flower and the Secret Fan, Flower Net (an Edgar Award nominee), The Interior, and Dragon Bones, as well as the critically acclaimed memoir On Gold Mountain. The Organization of Chinese American Women named her the 2001 National Woman of the Year. She lives in Los Angeles.

Three women become fast friends while working as chorus girls in a nightclub in prewar San Francisco.  Told in alternative viewpoints between, Helen, Ruby and Grace, these girls related how they become entertainers in China Town and the disadvantages each has to overcome.   Each woman has an almost horrific background and as you learn more about them, you will end up rooting for them to success and how hard it is for women to be more than property, especially in Asian cultures.

Helen, is the “good girl” but there is a distant sadness in her background and you don’t find out until the end exactly what has happened to her.  Ruby, is fast and lives life just for pleasure, although she also has a secret to hide.  Grace, too, has issues, and her story probably connected with me the most.  They all betray each other, but remain friends and seem to always have each other’s back.  Their lives become entwined and they story they share has needed to be told for a long time.  The discrimination and the horror of war is not lost on these women.


There are so many themes that are covered in this story.  Feminism, cultural identity and family are just a few of the ideas covered.  These women were going out on their own before Rosie the Riveter become a thing in WWII.  I had never heard of the Chop Suey Circuit and found this look at the entertainment industry fascinating.  I have been a fan of Lisa See since I first read Snowflower and the Secret Fan, I have since read all of her work and each novel is better than the last.

Disclosure I received this book from the publisher at no charge and in no way influenced my review.  If you are considering purchasing this book or anything else from Amazon, please use my link above since I earn a very small percentage of the sale which helps pay for shipping my giveaways!  You can also support the blog by clicking on the ads at the top of the page.