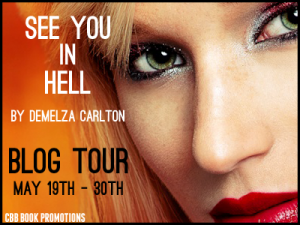 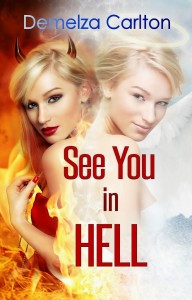 See You in Hell (Mel Goes to Hell) by Demelza Carlton

Melody Angel takes a job as a temp at the HELL Corporation. Surrounded by eternal bureaucracy gone mad, demons who love making life miserable, and dying for a decent coffee, it may take a miracle for Mel’s mission to succeed. She must find out what evil plans the Lord of Lies has up his sleeve and stop him, using any means necessary. Lucifer and his minions are out to take over the world, but there’s more than money at stake when the Devil drives.

Adding trouble and temptation to Mel’s job is Luce Iblis, the damnably hot CEO, who has set his smouldering eyes on the new office angel and is determined to claim her, body and soul.

Can ultimate evil and angelic perfection escape a limbo of desire and find a paradise of their own?
Goodreads  | Amazon

Demelza Carlton has always loved the ocean, but on her first snorkelling trip she found she was afraid of fish.
She has since swum with sea lions, sharks and sea cucumbers and stood on spray drenched cliffs over a seething sea as a seven-metre cyclonic swell surged in, shattering a shipwreck below.
Demelza now lives in Perth, Western Australia, the shark attack capital of the world.
The Ocean’s Gift series was her first foray into fiction, followed by her suspense thriller Nightmares trilogy. She swears the Mel Goes to Hell series ambushed her on a crowded train and wouldn’t leave her alone.
Connect with the author:
Website | Facebook | Twitter | Goodreads | YouTube | Amazon | Pinterest | Google +

SOURCE:  AUTHOR
MY THOUGHTS — LOVED IT
Melody Angel travels the world, putting out fires started by the demons of Hell, namely, Lucifer, who is rumored to be returning to Earth even though there is a ban on that.  Mel, has been convinced to take a temp job at the Health, Environment,Life and  Lands Corporation or HELL Corp.  as an inside source of information and to keep tabs on Lucifer.  The story is filled with double entendre, sly observations and witty dialogue.  As Mel winds her way through the corporation working for Lilith (yes, that one) and figuring out if Luce Iblis is actual the devil in disguise, she proves that nice doesn’t equal a pushover.
The interactions of Mel with the other office workers is sometimes filled with a touch of contempt but done in such a hilarious manner that it is never putting them down.  As an angel, I would have expected Mel to smite them all with a fiery sword, instead she kills them with wit and kindness.  Luce is a complicated character but overall contains every male stereotype of a male magnified to the nth degree.  I really enjoyed this light-hearted read and can’t wait for the next installment.