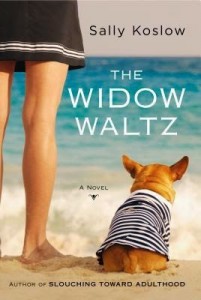 Publication Date: May 27, 2014
Georgia Waltz has things many people only dream of: a plush Manhattan apartment overlooking Central Park, a Hamptons beach house, valuable jewels and art, two bright daughters, and a husband she adores, even after decades of marriage. It’s only when Ben suddenly drops dead from a massive coronary while training for the New York City Marathon that Georgia discovers her husband—a successful lawyer—has left them nearly penniless. Their wonderland was built on lies.

As the family attorney scours emptied bank accounts, Georgia must not only look for a way to support her family, she needs to face the revelation that Ben was not the perfect husband he appeared to be, just as her daughters—now ensconced back at home with secrets of their own—have to accept that they may not be returning to their lives in Paris and at Stanford subsidized by the Bank of Mom and Dad. As she uncovers hidden resilience, Georgia’s sudden midlife shift forces her to consider who she is and what she truly values. That Georgia may also find new love in the land of Spanx and stretch marks surprises everyone—most of all, her.

Sally Koslow’s fourth novel is deftly told through the alternating viewpoints of her remarkable female protagonists as they plumb for the grit required to reinvent their lives. Inspiring, funny, and deeply satisfying, The Widow Waltz explores in a profound way the bonds between mothers and daughters, belligerent siblings, skittish lovers, and bitter rivals as they discover the power of forgiveness, and healing, all while asking, “What is family, really?”

Biography
Sally Koslow is the author of THE WIDOW WALTZ, her recently released fourth novel, which Library Journal recently called “page-turning” and “well-written,” and SLOUCHING TOWARD ADULTHOOD: How To Let Go So Your Kids Can Grow Up, now available in paperback, which has been optioned by NBC for sitcom development.

Sally’s second novel, THE LATE, LAMENTED MOLLY MARX, became a besteller in Germany (ICH, MOLLY MARX, KURZLICH VERSTORBEN) as well as a Book Pick by Target, who selected her third novel, WITH FRIENDS LIKE THESE, as an Emerging Writer Book. Her debut novel, LITTLE PINK SLIPS, was inspired by her long career as the editor-in-chief of iconic McCalls Magazine, which was taken over by Rosie O’Donnell. Her books have been published in a dozen countries. Most are available on Kindle as well as in audiobook form.

To arrange a book club visit, inquire about independent writing coaching online or in person, or just to say hello,

We had piles of Little Golden Books that I gobbled up as I learned to read in first grade. They were a great escape from the Dick and Jane series. My older brother is Dick and I have a younger sister, Betsy; it was a source of humiliation that I had the name of the baby. The shame. My favorite grade school book was The Secret Garden by Frances Hodgson Burnett, a gift from my well-read grandmother that began a love affair with English novels.

Three novels: The Flamethrowers by Rachel Kushner, for a newly-formed book club of Manhattan writers; Moon Tiger by Penelope Lively, for my book club with former magazine colleagues, and Love & Treasure by Ayelet Waldman.

Weeds, sadly, along with some extremely determined hostas plants and hydrangeas and rhododendrons too stubborn to flower.

The spelling of “hostas”
5. What makes you cringe?
My own writing mistakes. Yesterday, I was proud of a piece I published in TheAtlantic.com until a reader pointed out that I’d spelled “reins” as “reigns.”

MY THOUGHTS LOVED IT

Georgia thinks her marriage is in pretty good shape.  Her husband, Ben, is a successful lawyer and they have a lovely apartment in New York City, a county house as well as a Hampton beach house.  She quit working as a high school English teacher soon after they adopted an adorable little girl from Korea named Nicola. Soon after, Georgia discovers she is pregnant with another daughter, Louisa.  Raising the girls, volunteering and a bit of gardening have become a way of life for Georgia. She thinks she has the perfect life until her husband drops dead from a heart attack while our for a run.  When the estate lawyer tells her she is broke and that Ben has mortgaged everything, she gathers her girls around her and starts to dig her way out of the mess.  Her pampered girls rally to her side and start to give up their selfish ways.

Even though Georgia is devastated that her husband could have left her in such dire straights, she knows she must act and she starts selling off anything not nailed down to avoid bankruptcy.  She also unravels a mysterious life that her husband was leading and it is nothing that she could ever having possibly imaged.  Nicola, her eldest, has never quite fit in with the social set her sister runs in, so she has traveled the world in search of herself.  Louisa, has dropped out of Stanford after hooking up a successful DJ one night, only to turn up pregnant.  All of this drama is dumped on Georgia. who seems to stoically sort through the messes while reconnecting with her lost girls.  At the same time, her daughters encourage her to start her own business sorting out rich kids and their college essays.

I know most women have thought about their husbands dying, either peacefully in their sleep or some other messy form, but if it actually happened to them, they would still be devastated.  This is the case for Georgia, she had no inkling there was anything wrong in her marriage and that the money situation was all taken care of.  She tells her girls, she saw the investment portfolio but later admits that it was years prior and then she stopped paying attention.  Ladies: Pay Attention! She also meets a man that ultimately brings her happiness, even though he is the exact opposite of what Ben was in the looks department.   I got the biggest kick out of her brother, Stephan and his partner Daniel, who pulled her through her darkest times.  *Minor Spoiler Alert:  There is one devastating moment for Georgia when she meets the “other woman” and when all the fact start to overwhelm her, she discovers a strength that allows her to move on.  A true BRAVO moment for me.  Overall, a quick and easy read that is the definition of “beachy”.

WANT TO WIN A COPY OF THIS  Book? US ONLY

Open only to those who can legally enter
Winning Entry will be verified prior to prize being awarded.
No purchase necessary.
You must be 13 or older to enter .
The winner will be chosen by rafflecopter and announced here as well as emailed and will have 48 hours to respond or a new winner will be chosen.
This giveaway is in no way associated with Facebook, Twitter, Rafflecopter or any other entity unless otherwise specified.
The number of eligible entries received determines the odds of winning.
Giveaway was organized by BookHounds and sponsored by the publisher.
VOID WHERE PROHIBITED BY LAW.

Disclosure I received this book from the publisher at no charge and in no way influenced my review. If you are considering purchasing this book or anything else from Amazon, please use my link above since I earn a very small percentage of the sale which helps pay for shipping my giveaways!