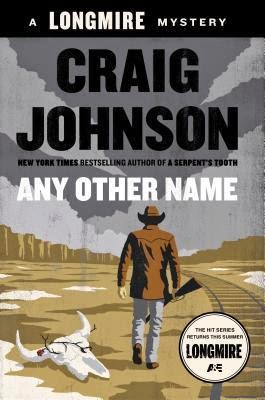 Publication Date: May 13, 2014
Sheriff Walt Longmire had already rounded up a sizable posse of devoted readers when the A&E television series Longmire sent the Wyoming lawman’s popularity skyrocketing. Now, with three consecutive New York Times bestsellers to his name and the second season of Longmire reaching an average of 5.4 million viewers per episode, Craig Johnson is reaching a fan base that is both fiercely loyal and ever growing.
In Any Other Name, Walt is sinking into high-plains winter discontent when his former boss, Lucian Conally, asks him to take on a mercy case in an adjacent county. Detective Gerald Holman is dead and Lucian wants to know what drove his old friend to take his own life. With the clock ticking on the birth of his first grandchild, Walt learns that the by-the-book detective might have suppressed evidence concerning three missing women. Digging deeper, Walt uncovers an incriminating secret so dark that it threatens to claim other lives even before the sheriff can serve justice—Wyoming style.

Craig Johnson is the author of eight previous novels in the Walt Longmire series. He has a background in law enforcement and education. He lives in Ucross, Wyoming, population twenty-five.

US only, sorry, NO po boxes
Open only to those who can legally enter
Winning Entry will be verified prior to prize being awarded. No purchase necessary.
You must be 13 or older to enter .
The winner will be chosen by rafflecopter and announced here as well as emailed and will have 48 hours to respond or a new winner will be chosen.
This giveaway is in no way associated with Facebook, Twitter, Rafflecopter or any other entity unless otherwise specified.
The number of eligible entries received determines the odds of winning.
Giveaway was organized by BookHounds and sponsored by me
VOID WHERE PROHIBITED BY LAW.