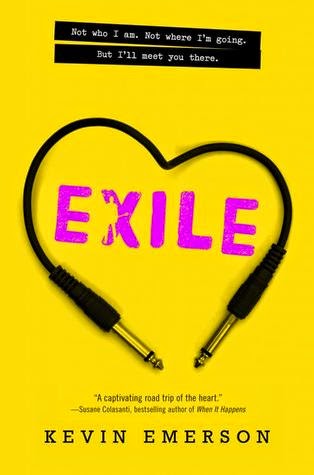 Publication Date: April 29, 2014
Kevin Emerson’s Exile combines the swoon-worthy romance of a Susane Colasanti novel with the rock ‘n’ roll of Eleanor & Park. Summer Carlson knows how to manage bands like a professional—minus the whole falling-for-the-lead-singer-of-the-latest-band part. But Caleb Daniels isn’t an ordinary band boy—he’s a hot, dreamy, sweet-singing, exiled-from-his-old-band, possibly-with-a-deep-dark-side band boy. She also finds herself at the center of a mystery she never saw coming. When Caleb reveals a secret about his long-lost father, one band’s past becomes another’s present, and Summer finds it harder and harder to be both band manager and girlfriend. Maybe it’s time to accept who she really is, even if it means becoming an exile herself. . . .

Kevin Emerson is the author of The Lost Code: Book One of the Atlanteans, The Fellowship for Alien Detection, the Oliver Nocturne series, and Carlos Is Gonna Get It. He is also a musician and has most recently released two albums with his band, the Board of Education. A former science teacher, Kevin lives in Seattle and teaches writing to teens through Writers in the Schools, Richard Hugo House, and 826 Seattle.

Catherine Summer Carlson knows how to manage a band and make them successful, so successful that they are stolen away from her by a major label. She also has a thing for lead singers and now in her senior year at Mount Hope, the local art magnet school in Los Angeles, she must face the fact that there is not a band for her to take to stardom and ends up making college plans. Then she meet Caleb who just had a nasty break up with his band. She sees the potential in Caleb and starts to put together a solid foundation for a new stellar act. She doesn’t plan on the chemistry that is ignited between them though. Caleb also confesses to her that he has just learned that his father was one of rock’s brightest stars when his untimely death brought an end to his stardom.Without giving away any plot details, Summer (as she is known professionally) helps Caleb track down his father’s last songs as well as deal with despicable music corporations that own everything about his father. As the pair become closer and have all of the ups and downs a new relationship and mix that in with volatile musicians, the story really comes together. Summer is likable and Caleb seems like every girl’s rock star dream. I really enjoyed this one and want to read more by this author. And yes, I really want to read the next one.

Parents:  Mentions of adults with substance abuse, some alcohol references, a bit of language and some sexual situations but overall handled nicely and in context.  The story also imports the necessity of doing well in school, acting responsibly and being true to yourself.

Disclosure
I received this book from the publisher at no charge and in no way influenced
my review.  If you are considering purchasing this book or anything else
from Amazon, please use my link above since I earn a very small percentage of
the sale which helps pay for shipping my giveaways!  You can also support
the blog by clicking on the ads at the top of the page.