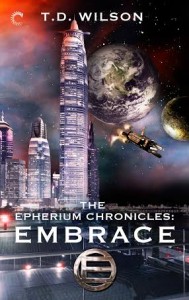 
Book one of The Epherium Chronicles


Hope. Captain James Hood of the Earth Defense Forces remembers what it felt like. Twenty-five years ago, it surged through him as a young boy watching the colony ships launched by mega-corporation Epherium rocket away. He, like so many others, dreamed of following in the colonists’ footsteps. He wanted to help settle a new worldâ€”to be something greater.


Then came the war…


Hope. During years of vicious conflict with an insectoid alien race, it was nearly lost. Though Earth has slowly rebuilt in the six years since the war, overcrowding and an unstable sun have made life increasingly inhospitable. When mysterious signals from the nearly forgotten colony ships are received, Hood is ordered to embark on a dangerous reconnaissance mission. Could humanity’s future sit among the stars?


Hope. Hood needs it now more than ever. As secrets about the original colonists are revealed and the Epherium Corporation’s dark agenda is exposed, new adversaries threaten the mission, proving more dangerous to Earth than their already formidable foes.

Praise
From Laura (5 star reviewer on Amazon) “I was shocked about how fast the author sucked me into a new world, a world that I am impatiently awaiting the next in the series. I read from another reviewer that it would make a great television series and I would have to agree with that reviewer.”


From Kathryn Svendsen of Kathryn’s Shelf Full of Books Blog (4 star review) : “It was a delight to read. Mr. Wilson did an excellent job of introducing each of the many characters involved in this large crew. There were many people to keep track of, and like a movie we found out a bit about the character of each one as we went along.”


â€œI have an idea about that,â€ Hood said as he opened a channel to Engineering. â€œMr. Whitaker. I need that shield of yours.â€


Whitaker responded slightly out of breath. â€œSorry, Captain. I canâ€™t give it to you. That second rock that smacked us caused one of the reactors to scram, so we shut it down. Until we get that stable and some more juice in the batteries, I canâ€™t power it up.â€


Hood muttered under his breath as he pounded his fist on his chair. He took a deep breath, and let it out slowly as he closed the channel. â€œAlright, our ace is out of commission,â€ he told Sanchez, â€œand even with the best of my contingency plans, we are going to have to do this the hard way.â€


â€œYou have multiple contingency plans for this?â€ Sanchez asked as he pointed to the viewport and the many asteroids floating nearby.


Hood looked at Sanchez and raised a single eyebrow. 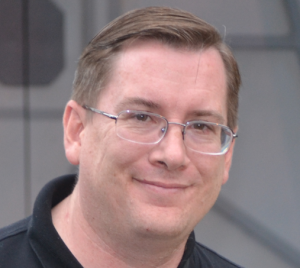 
T.D. Wilson was born in 1968 in Troy, Ohio and has been an avid fan of science fiction and fantasy from a very young age. He holds a Bachelor of Science in Electrical Engineering and has supported the systems and networks in several of the largest Supercomputing data centers in the world. His early thirst for adventure in reading began as he explored many of the great stories of Sherlock Holmes by Sir Arthur Conan Doyle. As his reading scope expanded, Mr. Wilson was fascinated by strange new worlds from the magical of Middle Earth and Narnia to the far reaches of space in Star Trek and Babylon 5. As a science fiction author, he strives to integrate a realistic flavor to his worlds by providing his readers a feel for the real science in science fiction. A topic he loves to discuss with his friends and readers. Mr. Wilson still lives in Ohio with his wife and their two sons.