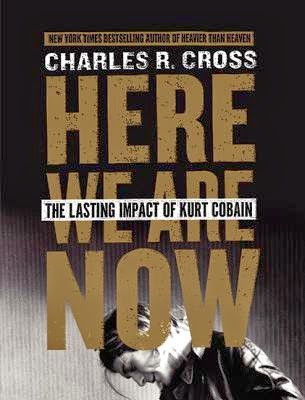 In Here We Are Now: The Lasting Impact of Kurt Cobain, Charles R. Cross, author of the New York Times bestselling Cobain biography Heavier Than Heaven, examines the legacy of the Nirvana front man and takes on the question: why does Kurt Cobain still matter so much, 20 years after his death?
Kurt Cobain is the icon born of the 90s, a man whose legacy continues to influence pop culture and music. Cross explores the impact Cobain has had on music, fashion, film, and culture, and attempts to explain his lasting and looming legacy.

About the Author
Charles R. Cross has written nine books, including Heavier Than Heaven: The Biography of Kurt Cobain, which was a New York Times bestseller, won the 2002 ASCAP Award for Outstanding Biography, and was called ”one of the most moving and revealing books ever written about a rock star” by the Los Angeles Times. He is also the author of the New York Time bestseller Room Full of Mirrors: The Biography of Jimi Hendrix and was the coauthor of the New York Times bestseller Kicking & Dreaming: A Story of Heart, Soul, and Rock & Roll, with Ann and Nancy Wilson. He lives in Seattle, Washington.

SOURCE:  PUBLISHER
MY THOUGHTS
ABSOLUTELY LOVED IT
I am so glad the author has the subtitle of The Lasting Impact of Kurt Cobain for this book.  It really is a wonderful recap of how Cobain impacted the music scene during the early 90’s. I went back and listened to Nevermind and it still stands out as one of the best albums to come out.  Cross also notes that this wasn’t always true and that the mystique of Cobain being in the 27 Club sent his star rocketing.  My favorite moment in the book is how Cobain’s style is co-opted by designers and fails to connect with the target audience since you could buy the same thing at the local thrift store.
It is always easier to look back to see what impact a musician has on culture but to see it was there at the beginning is something special.  Cross was there and recognized the spark that Cobain had and his personal insights are wonderfully conveyed in this book. He also noted that Cobain had a family history of addiction and depression with several close relatives committing suicide and that these issues must be dealt with in society.  There is also a bit of melancholy that comes through in his writing that makes you question how this could have happened to someone as successful as Cobain.
The first thing I did was when I started to read this book was to see if Marco Collins was mentioned in this book since Marco was so entwined in the Seattle music scene during the rise of Nirvana.  Yes, Marco is mentioned and quoted, so I knew this book was on the up and up and since he was also the one who confirmed the death to most of us in radio land.   Cross also was a central part of that scene and has some great stories about Nirvana’s early days.  For more history on the band pick up his detailed history Heavier Than Heaven