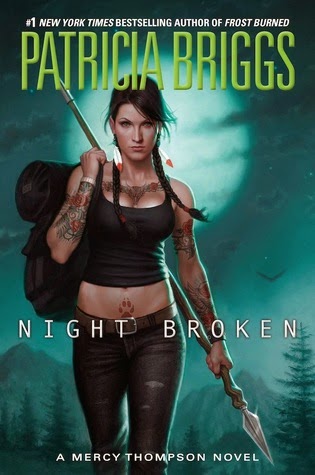 Publication Date: March 11, 2014
#1 New York Times bestselling author Patricia Briggs’s Mercy Thompson series has been hailed as “one of the best” (Fiction Vixen). Now, Mercy must deal with an unwanted guest—one that brings a threat unlike anything she’s ever known. An unexpected phone call heralds a new challenge for Mercy. Her mate Adam’s ex-wife is in trouble, on the run from a stalker. Adam isn’t the kind of man to turn away a person in need—and Mercy knows it. But with Christy holed up in Adam’s house, Mercy can’t shake the feeling that something about the situation isn’t right.

Soon, her suspicions are confirmed when she learns that Christy has the farthest thing from good intentions. She wants Adam back and she’s willing to do whatever it takes to make it happen, including turning Adam’s pack against Mercy.

Mercy isn’t about to step down without a fight, but there’s a more dangerous threat circling. Christy’s stalker is more than a bad man—in fact, he may not be human at all. As the bodies start piling up, Mercy must put her personal troubles aside to face a creature with the power to tear her whole world apart.

About the Author
#1 New York Times bestselling author Patricia Briggs lives in Washington State with her husband, children, and a small herd of horses.

Ms.Briggs has another winner although no surprise there! Mercy is
settling in as Adams wife although the pack is still not happy he took on
a coyote as a mate. Still feeling her way around and trying to be a
step-mom A problem arises when Christy ,Adams ex seeks sanctuary from a
stalker ex-boyfriend. Mercy has Adam bring Christy to their home but with
the pack disgruntled with Mercy and the fact they love Christy things get
sticky mighty quick. And there’s that small problem of Christy wanting
Adam back! Throw into the mix that the Fae are after the Walking stick
and give her a time limit to get it or else. It’s another situation of
who does she trust to watch her back that won’t stab her in it!! During
all of this Mercy is also trying to solve a series of murders that point
to werewolves as the culprits. I always look forward to this series
coming out with a new book. Its a series that never grows old and boring
as you ride along with Mercy.