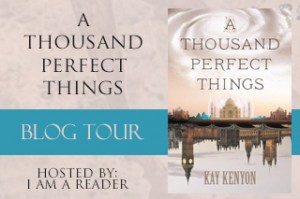 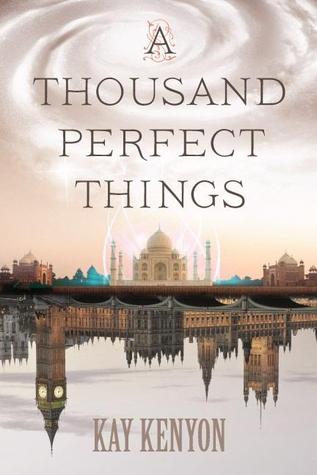 
In this epic new work, the award-winning Kenyon, whose work has be compared to Larry Nivens and Stephen R. Donaldson, creates an alternate Earth in the 19th century. This Earth is ruled by two warring factions—scientific Anglica (England) and magical Bharata (India).


Tori Harding, a Victorian woman, whose heart aches to claim the legendary powers of the golden lotus, must leave her reasoned world behind and journey to Bharata. In pursuit of the golden lotus, Tori will be forced to brave its magics, intrigues, deadly secrets and haunted places, to claim her destiny and choose between two lovers in two irreconcilable realms.


As a great native insurrection sweeps the continent of Bharata—Tori will find the thing she most desires, beautifully flawed and more wonderfully strange than she could have ever dreamed.

Praise for A Thousand Perfect Things


“This has become my favorite of all Kay Kenyon’s books. The science-driven men of Anglica have constructed a marvel of engineering-a bridge that crosses the ocean-but they don’t understand the mystical forces they’re facing in the dangerously seductive country of Bharata. As usual, Kenyon offers flawless world-building and a diverse cast of characters driven by conflicting and wholly believable desires. This is a rich, gorgeous, and marvelously detailed tapestry of a book.”
— Sharon Shinn, Author of Troubled Waters and Royal Airs


“Kay Kenyon has once again created a world into which one blissfully disappears, replete with magic and monsters, romance and reigning dynasties, set upon the fragile social scaffolding of mid-nineteenth century England. The story is, literally and figuratively, a bridge between the mystical and the very real, with a young heroine who a delivers a deliciously vicarious ride. Brilliantly told with elegant yet occasionally jarring prose, A Thousand Perfect Things is a masterwork from the mind of one of our best authors of compelling alternate realities.”
— Larry Brooks, Author of Story Engineering

Amazon * Barnes & Noble * Kobo * Book Depository
EXCERPT
Prologue
January 18, 1857
Lord Nelson’s statue perched on its granite column in the square, but to Edwina Banning it appeared that his shoulders stooped, as though he were weary of the heroic pose. It might have been a trick of the light.
Presently satisfied that the great naval hero was not drooping–and how, indeed, could a statue droop–Edwina tipped her parasol back into place and turned to watch six-year old Anna who was feeding pigeons with her father. The day darkened as a sudden high cloud tented the sky wintry gray. A horse pulling a coach shied in its traces, for a moment disrupting the decorous progression of carriages. Anna’s father pulled her close.
“Papa,” Anna said, pointing at Lord Nelson on his column, “the statue is bleeding.”
Mr. Banning held his top hat on as he craned his neck to see. “Pigeons do make rather a mess,” he said.
“But the mess is red.”
Edwina Banning turned to look, noting with alarm a red slime oozing down the column. Just as she was trying to imagine how this could be, she stared hard at one of the lions anchoring a corner of the plinth. The metal sculpture opened its mouth in a cavernous yawn. It was said that the iron lions had been cast from Scottish cannons. She had always found satisfaction in that story, and therefore it took her a moment before she entirely grasped that the animals were awake.
They stirred.
As Mr. and Mrs. Banning gaped in stunned denial, blood oozed from under Nelson’s coat and dribbled down the granite column.
Edwina’s lips parted for a scream just as one of the lions–the one facing the church of St. Martin’s-in-the-Fields–leapt through the air and landed on a peanut vendor, crushing him to the ground. Then the second lion found its prey: a top-hatted gentleman with a cane. The cane crashed down on the beast’s head, but as the lion was made of iron, it had no effect. The square erupted with shouts and screams. Pigeons flew up in a clatter of wings and demented cooing.
Lord Nelson sagged and fell to one knee, clutching his chest.
The rampage began. The lions rushed to the slaughter, breaking necks with mighty paws and tearing at throats. They did not linger to feed, but turned from one victim to the next, finding their quarry closely packed in the square, though trying to flee. The fastest among them got as far as the steps of the National Gallery before falling.
Mr. Banning yanked open the door of a carriage, and surprised the lady inside by throwing his daughter into her lap and shoving his wife in as far as he could. He jumped inside and slammed the door closed. As terrified horses charged away, their careening carriages in tow, people in the square threw themselves on top of the conveyances, or clung to riding boards.
From the floor of the carriage where she huddled with her mother little Anna whispered, “They’re not real lions, though.”
Edwina clutched her daughter tightly. They weren’t, they weren’t at all.
But they killed. 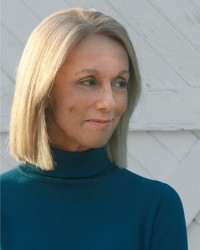 
Kay Kenyon is the author of eleven science fiction and fantasy novels, including A Thousand Perfect Things. She is the author of the critically acclaimed science fiction quartet, The Entire and The Rose. Bright of the Sky was among PW’s top 150 books of 2007. The series has twice been shortlisted for the ALA Reading List awards and three times for the Endeavour Award. Four of her novels have been translated into French, Spanish and Czech. Along with her novels Tropic of Creation and Maximum Ice, two of the works in the quartet received starred reviews from PW.