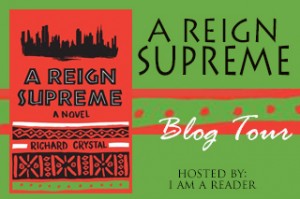 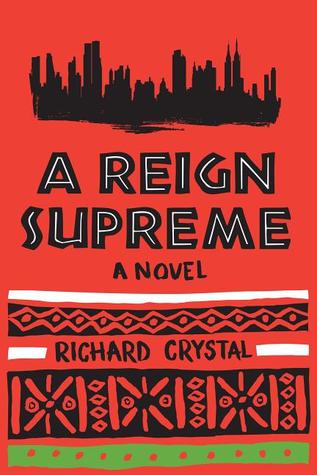 A Reign Supreme by Richard Crystal

When a copper deposit is discovered on the land of the Makenda tribe in eastern Kenya, a young king, Ule Samanga, is told to relocate his people to a refugee camp in Nairobi or risk imprisonment. When all appears lost, the young king discovers the existence of Curtis Jackson, a mysterious half-brother presently living in New York. Believing this unexpected news is an omen from the spirit of his ancestors, he eagerly seeks his help to save their sacred tribal homeland. A struggling mortgage broker and former jazz prodigy, Curtis initially has no interest in developing a relationship with his newly found African family. But when he’s presented with an intriguing business offer, he embarks on a journey to Africa that becomes a spiritual odyssey, changing him in ways he never imagined.

In this assured debut, Richard Crystal weaves a complex story of contemporary moral imperatives conceived during Obama’s victorious election as America’s first black President. Themes of corporate malfeasance and exploitation will resonate with readers of The Constant Gardener and Blood Diamond. But beyond the various political machinations, readers will find a heartwarming story infused with the strains of Coltrane, the history of jazz and the enduring power of family. 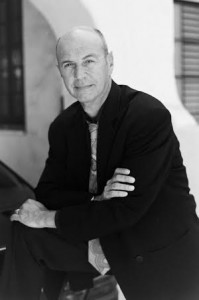 Mr. Crystal has produced and written countless television shows and penned numerous screenplays for theatrical feature films in Hollywood. He has sung and produced four pop/jazz albums performing the classic standards he first heard as a young boy growing up in a house filled with music. A Reign Supreme is his first novel, inspired by a trip to South Africa and Botswana on his twenty-fifth wedding anniversary with his wife Fran.

“Mr. Crystal has fashioned a tale of virtue and vice in the modern world. It deals with corporate greed, the politics of today’s African economic scene and how they test the people who have to make their living in that environment. And it’s all backed by the mellow sounds of modern jazz. I’m sure it will intrigue all.”
– Kareem Abdul-Jabbar, legendary basketball star, author and jazz aficionado

“From the streets of New York to a remote tribal village in Kenya, A Reign Supreme is a moody, intriguing and emotional story. Our hero’s journey from teenage jazz prodigy, to a man haunted by his past, to accepting his surprising fate of heritage, is a terrific read.
I’m not just Richard Crystal’s brother, I’m his fan.”
– Billy Crystal, actor, comedian and writer

“As you read ‘A Reign Supreme’ you will wonder if the author is a jazz musician from the streets of New York or was raised in a village in Kenya. The language of the characters is perfect and real. The descriptions of locations are both factual and extremely visual. Richard Crystal takes you on an adventure involving family loyalty, greed, life changing decisions and much, much more. Something for everyone.”
– Lou Adler, award winning music and film producer, recently inducted into the Rock n’ Roll Hall of Fame

“John Coltrane constructed his four-part magnum opus A Love Supreme as a harmonic journey meant to convey an ascendancy to spiritual enlightenment—the musical statement of one man meant to inspire and uplift all. With deep appreciation for that inspirational source, Richard Crystal has been inspired to create a story in four sections that follows that same path to a personal awakening, a return to one’s roots, and realization of one’s purpose. A Reign Supreme is a rare example of a powerful literary work drawing its spirit from a timeless musical classic, with a deft, reverential touch that avoids cliche or overstatement.”
– Ashley Kahn, jazz historian and author of A Love Supreme: The Story of John Coltrane’s Signature Album and Kind of Blue – The Making of the Miles Davis Masterpiece.

“In “A Reign Supreme”, Richard Crystal creates a multi-dimensional experience for the reader such as I’ve rarely experienced. Besides creating a fascinating and suspenseful plot that keeps the reader turning pages and transports him or her to Kenya with details you can taste, hear and feel so well you would swear you were there, he has, through his own musical experience, created descriptions of jazz that enables the reader to actually hear the music. It’s extraordinary.”
– Andrew Neiderman, Author of The Devil’s Advocate and the worldwide V.C. Andrews literary franchise

Amazon * Barnes & Noble * Kobo * The Book Depository
PLEASE WELCOME RICHARD TO BOOKHOUNDS!
1. I guess you could say my secret talent is singing jazz. I started my career in the entertainment business as a singer/actor in New York. The writing career evolved as a way to express myself in between performing work.
2. The song that reminds me of “A Reign Supreme” is the Christian hymn “Amazing Grace.” It is the song played by 16 year old Curtis Jackson at his high school music recital. The lyrics of the song ironically become his own personal life journey in the book.
3. Nothing was easy about writing this book. It took me three years to finish. However, I would have to say writing about jazz which has always been a love of my life and describing locations in New York where I lived for many wonderful years.
4. Whatever word comes to mind at the moment and communicates what I’m trying to say is the word I love. I’m easy.
5. My wife and I have had dogs for 25 years. Our favorite was a fawn colored saluki named Aja (which is the name of a character in the book as an homage)  Salukis are the oldest domesticated breed in the world. They emanate from Persia over 5000 years ago and are magnificent hunters reaching speeds up to 40 miles per hour. They are very aloof and cat-like in their independence. To me, they are like sharing your home with a piece of living art – that’s how beautiful they are.