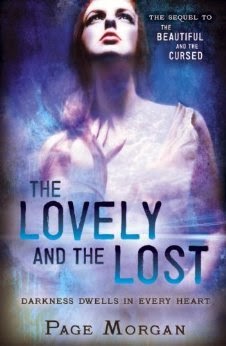 For readers of Lauren Kate’s Fallen series comes the sequel to The Beautiful and the Cursed,The Lovely and the Lost finds the Waverly sisters in mortal danger and able to trust no one.

Ingrid and Gabby Waverly moved to France expecting a quiet reprieve from London gossip, but the truth they face in their new home has a sharper–and deadlier–sting.
Paris is plagued by an underworld of demons and gargoyles who all seem to want something from the Waverly girls. Saving Ingrid’s twin, Grayson, from the fallen angel Axia nearly killed them. And they’re still being hunted–only this time, demons aren’t their only predators.

Ingrid’s blood is special: it bestows the power to command gargoyles. It’s an ability no other human has, and in the wrong hands, it could be used to send her cursed guardian, Luc, and his fellow Dispossessed to extinction. There are those who will do anything to get Ingrid’s blood–and they see no value in human life.

The Alliance has vowed to protect the Waverlys, and a new gargoyle has been assigned to guard their abbey home alongside Luc. But no one can watch over Ingrid, Gabby, and Grayson all the time–which means the three must learn to fight for themselves.
Because darkness follows the Waverlys. And sometimes darkness comes in the form you trust the most.

About the Author
Page Morgan has been fascinated with les grotesques ever since she came across an old black-and-white photograph of a Notre Dame gargoyle keeping watch over the city of Paris. The gargoyle mythologies she went on to research fed her imagination, and she became inspired to piece together her own story and mythology for these remarkably complex stone figures. Page lives in New Hampshire with her husband and their three children.
Visit her at pagemorganbooks.com and look for the first book in the Dispossessed trilogy, The Beautiful and the Cursed, available from Delacorte Press.

SOURCE:  AROUND THE WORLD ARC TOURS
MY THOUGHTS
LOVED IT

Ingrid is trying to embrace her angel blood while her brother, Grayson struggles with his demon blood and poor Gabby wishes she could fight.  This next installment of The Dispossessed, brings more unrequited love and missed connections I wanted to slap some sense into them all. The story continues as Ingrid decides that she will fight and save her family rather than give in to all of the evil.  Luc has his hands full as he tries to keep all of the Waverly’s safe.

Ingrid and Luc are almostthisclose to realizing that even though there are rules keeping them apart, it may come down to breaking those rules.  Gabby and Nolan are so attracted to each other, it would be a shame not to see that through and of course, the fathers really try to mess that one up.  Grayson follows Chelle around like a puppy dog and I haven’t decided it he can contain himself and get over himself  – talk about a drama queen.

Overall, this is a great bridge to the conclusion and I can’t wait to find out if the ending of this installment can get me to the ending I would love to see.  Each couple needs to work through tons of issues to come to the right conclusion.  Now, I can’t wait until the final installment.