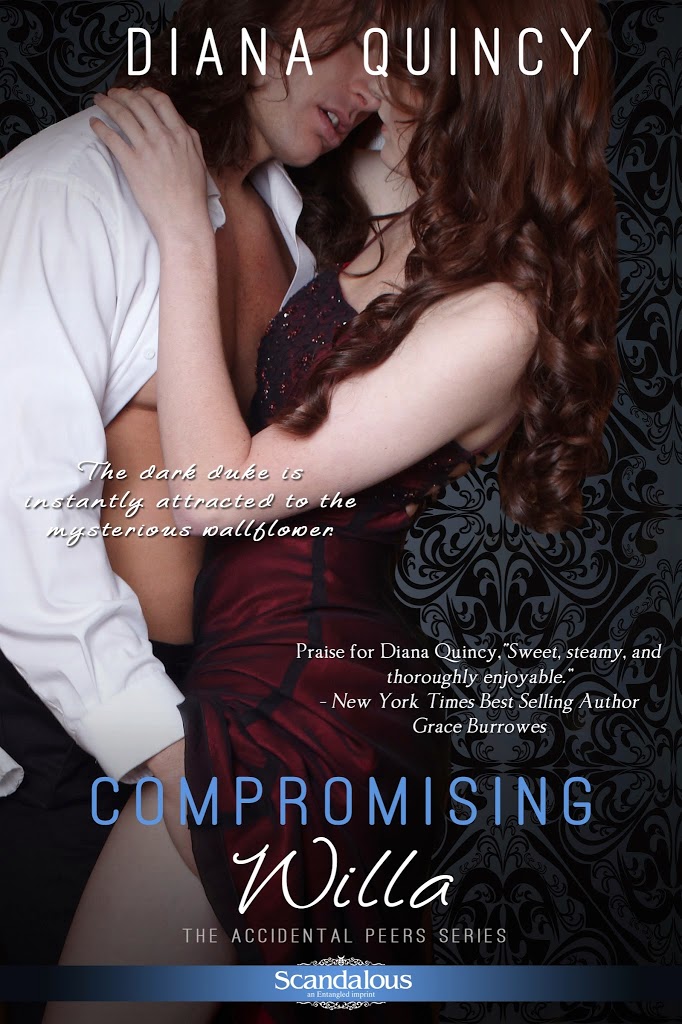 COMPROMISING WILLA by DIANA QUINCY
Lady Wilhelmina Stanhope is ruined and everyone knows it. Back in Town for the first season since her downfall, Willa plans to remain firmly on the shelf, assuming only fortune hunters will want her now. Instead she focuses on her unique tea blends, secretly supporting a coffee house which employs poor women and children. If her clandestine involvement in trade is discovered, she’ll be ruined. Again.

No one is more shocked by Willa’s lack of quality suitors than the newly minted Duke of Hartwell. Having just returned from India, the dark duke is instantly attracted to the mysterious wallflower. His pursuit is hampered by the ruthless Earl of Bellingham, who once jilted Willa and is now determined to reclaim her.

Caught between the clash of two powerful men, a furious Willa refuses to concede her independence to save her reputation. But will she compromise her heart?

EXCERPT
Cam regarded Willa with weary resignation. “Your reputation cannot survive another scandal.”
“We shall marry,” Hart said in decisive tones, certain of the inherent rightness of his decision. “It is the only answer.”
Willa’s arms crossed under her chest, drawing his eye to her abundant, softly quivering bosom. One that would soon be his to cherish—along with the rest of this heavenly woman. The thought of it triggered a surprising burst of gladness in him.
But she didn’t seem to be reacting with the same equanimity. “You two and your misplaced sense of honor are not going to force me into marriage with a man who has made his disdain for me quite clear.”
A glancing pain stung Hart’s chest. “Do you find the idea of marriage to me so abhorrent?”
“I won’t consent,” she said stubbornly to Cam. “My reputation be gone. I won’t be forced into a silly charade of a marriage for no good reason. I won’t do it.”
“I cannot force you.” Sadness weighted Cam’s voice. Willa exhaled with obvious relief, but then Cam turned to Hart. “She leaves me no alternative. I demand satisfaction.”
“What! Are you cracked?” Willa blurted. “Don’t be a fool. There is not going to be any duel!”
Tension snaked into every muscle in Hart’s body. “Name your seconds, Camryn.”
Willa whipped around to Hart. “Don’t be so beetle brained,” she cried. “Cam’s a perfect shot. He’ll kill you.”
“So be it.” A sense of calm infused him. “Your honor has to be avenged.”
“Avenged?” Willa’s voice rose in panic. “What of your mother? You would leave her alone in this world? She has already lost one son. You would condemn her to a life without either of her children?”
“It is not ideal, but I have little choice in the matter.” Heaviness settled in his heart. His mother’s grief would be unimaginable. “Name your seconds, Camryn.”
“Not ideal? Aren’t you the last of your line?” she asked in a voice gone shrill with a rising sense of panic.
He nodded in assent without taking his eyes off Cam’s stony expression. “What will it be, old friend, bullet or blade?”
“Wait!” Desperation edged her voice. “You must give me time to consider this. If marrying Hartwell is the only alternative to you two killing each other, I should at least have a few days to consider it.”
“No.” Cam’s impenetrable stare moved from Hart to Willa. “I will have your consent now.” 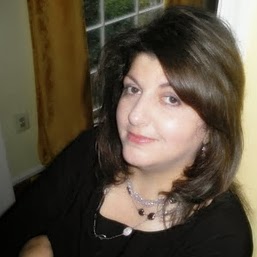 Diana Quincy is an award-winning former television journalist who decided she’d rather make up stories where a happy ending is always guaranteed. Growing up as a foreign service brat, Diana visited many countries and is now settled in Virginia with her husband and two sons. When not bent over her laptop or trying to keep up with laundry, she enjoys reading, spending time with her family and dreams of traveling much more than her current schedule (and budget) allows.

I’m pretty sure it involved Dick, Jane, Sally and their dog, Spot. Those early readers are the first books I can remember. When my children started reading, I was a little disappointed that Spot and the gang were no longer used in schools. Still, for nostalgia’s sake, I did manage to find a volume of Dick and Jane stories to share with my two boys. The kids were pretty indifferent to the books, but revisiting the characters as an adult was a lot of fun for me!

What are you reading right now?
I’m listening to the novel, Longbourn, by Jo Baker, while I do my walking. The story focuses on the lives of the Bennet family servants from Pride and Prejudice. I’m also reading Ernest Hemingway’s The Sun Also Rises. I recently finished The Paris Wife, Paula McLain’s fictionalized account of Hemingway’s first wife, which piqued my interest in Hemingway’s works. It also prompted me to read A Moveable Feast, Hemingway’s account of his days in Paris with his first wife, which I found fascinating.

My garden, if we are to be literal, does not grow. Any plants that are still alive inside my house have my husband to thank for dutifully watering them. Any plants that prosper outside of my house have Mother Nature to thank for their existence. If we are talking in metaphors, my garden is my family and my writing. Both are blossoming and, thankfully, thriving far more than my actual plants!

How to spell “Longbourn” correctly and to make sure I got the author’s name right while answering question #2 above.

Cruelty to people, especially children. And really terrible writing, especially when it’s my own!