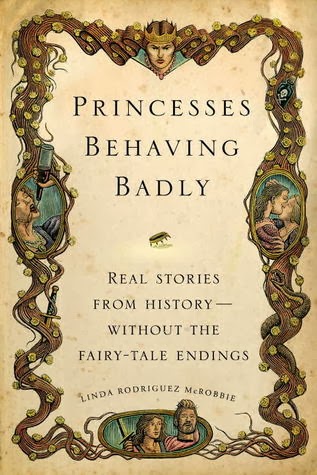 Publication Date: November 19, 2013
You think you know her story. You’ve read the Brothers Grimm, you’ve watched the Disney cartoons, you cheered as these virtuous women lived happily ever after. But the lives of real princesses couldn’t be more different. Sure, many were graceful and benevolent leaders—but just as many were ruthless in their quest for power, and all of them had skeletons rattling in their royal closets. Princess Stephanie von Hohenlohe was a Nazi spy. Empress Elizabeth of the Austro-Hungarian empire slept wearing a mask of raw veal. Princess Olga of Kiev murdered thousands of men, and Princess Rani Lakshmibai waged war on the battlefield, charging into combat with her toddler son strapped to her back. Princesses Behaving Badly offers minibiographies of all these princesses and dozens more. It’s a fascinating read for history buffs, feminists, and anyone seeking a different kind of bedtime story.

About the Author
Linda Rodriguez McRobbie has written for the Boston Herald, Christian Science Monitor, CNN Money, US News & World Report, and Mental Floss. She lives in London with her husband, son, and cat.

SOURCE:  PUBLISHER
MY THOUGHTS
LOVED IT
This book is a lot of fun and full of information in easily digested takes on princesses through out history.  There is no sugar coating these women.  Some are hussies,  villains, crazy and down-right smart.  Most of them are marginalized in some way by men, who sought their power and wealth.  Of course, since men historically have written the books on the past, it is hard to find the truth in what these women were actually like.  I truly enjoyed the chapter on the mad princesses.  It was Princess Juana of Spain that truly struck me as being painted as ill when the men in her life were just going for a power grab.

The stories could almost appear in People magazine since they paint these women as very interesting characters that try to get to the meat of the story rather than the glossing over by history.  I would love this to be a television series on the History Channel.  That would be such a wonderful take.  Each week could star a new historical princess from ancient to modern times.  And modern times are covered nicely here as well, with Britain’s Princess Margaret and Diana noted.

US Only –  PO Boxes OK!
Open only to those who can legally enter
Winning Entry will be verified prior to prize being awarded.
No purchase necessary.
You must be 13 or older to enter .
The winner will be chosen by rafflecopter and announced here as well as emailed and will have 48 hours to respond or a new winner will be chosen.
This giveaway is in no way associated with Facebook, Twitter, Rafflecopter or any other entity unless otherwise specified.
The number of eligible entries received determines the odds of winning.
Giveaway was organized by BookHounds and sponsored by the publisher
VOID WHERE PROHIBITED BY LAW.