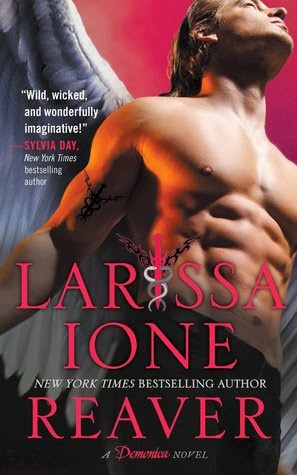 December 17, 2013;
Grand Central Publishing Mass Market; $8.00;
Reaver is an angel with a past, a record, and a less-than-heavenly attitude. Powerful enough to fight alongside the fiercest battle angels-and crazy enough to risk his wings on a one-way mission to hell-he’s agreed to go where no angel has ever gone before . . . to steal the most seductive and dangerous prize of Satan himself.

Harvester is one of the Fallen, a once-heroic angel who sacrificed her wings to work as an undercover agent in hell. But now her cover has been blown, and she’s doomed to an eternity of agonizing torture. Even if Reaver can snatch her away from Satan’s lair, even if they can fight their way out of the underworld’s darkest depths, there is one thing Harvester can never escape-her newfound thirst for an angel’s blood. . .

Buy Links:
Amazon
Barnes & Noble
IndieBound
Bookish
“R-Reaver?”
Reaver held Harvester’s frail body tight against his as he navigated the final steps of a winding ledge that dropped them into a world of weird. “It’s me. It’s okay. We’re safe.”
Relatively safe, anyway. Relativemeaning that they weren’t dead. Yet. He just hoped the same could be said for Tavin, Matt, and Calder. When he’d left them to sneak into Satan’s realm, they’d been engaged in a battle they’d initiated as a diversion. It had been a risky move, and Reaver could only pray they’d make it to the rendezvous point.
A hunter’s horn sounded in the distance and was answered by another, closer horn signal. Satan’s minions hadn’t gained ground, but they were spreading out. Damn.
He scanned the landscape of thorny plants, hills of blackened earth and trees, and twisted, abandoned structures. Nothing moved.
He looked down at Harvester, and as before when he first saw her hanging over a pit of acid, he felt sick to his stomach. He didn’t like Harvester even though he was grateful for the things she’d done, but she didn’t deserve this; her naked body too thin and mottled with bruises and ligature marks, her once silken black hair tangled and dull, and worst of all, missing her gorgeous green eyes.
Under ideal circumstances, an angel could heal from even the most heinous injuries within hours. But these were far from ideal circumstances, and Harvester’s source of power, her wings, had been severed. Without wings or medical assistance, it could take weeks, even months, for an angel’s body to fully heal.
“I can’t risk healing you more than I did,” he said. “My power isn’t reliable right now, and I could do more harm than good.”
“Reaver,” she croaked, as if he hadn’t spoken. “Why…how…”
“Shh.” He tucked her face into his chest, quieting her. “We’re going to meet up with some friends, and then I’ll answer all your questions.”
Reaver and the assassins had worked out a plan A and a plan B. Plan A had been shot to hell when iron gates had prevented Reaver from getting out of Satan’s realm to the south, where his companions would have been waiting. Now, with demons in pursuit, they were on their way to plan B. Hopefully Tav, Matt, and Calder had realized quickly that Reaver’s escape route had gone bad.
Inhaling the stench of rotten vegetation that permeated this section of Sheoul, he started away from the skeletons of some burned-out buildings and toward a mountain range as expansive as the Rockies. He moved swiftly, outrunning the sounds of pursuit and pausing once to blast a group of imps with a ball of lightning. The sphere struck the leader, and from there sent electrical strikes at each of the surrounding imps, frying them all in a handy eight-for-one.
Harvester slept in his arms, barely stirring when he stopped to listen for anyone following them. By the time they neared the plan B meeting site, Reaver was sure they’d lost the demons—temporarily. Reaver wasn’t naive enough to think they were off the hook. The demons chasing them were only the first wave, the security detail unlucky enough to be guarding the dungeon Harvester was kept in.
Once Satan got wind of this, if he hadn’t already, Reaver and Harvester were going to have legions of minions on their heels. 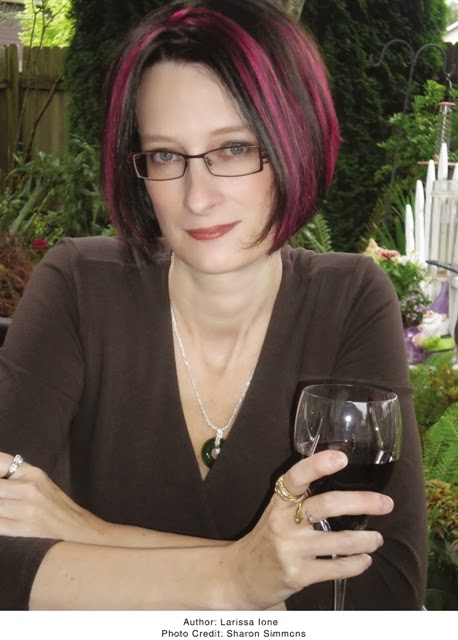 A former meteorologist and EMT, Air Force veteran Larissa Ione now gets her daily dose of excitement from vampires, werewolves, demons, and the Four Horsemen of the Apocalypse. She lives in wintery Wisconsin with her U.S. Coast Guard husband, her teenage son, a rescue cat, and her hellhound, a King Shepherd named Hexe.