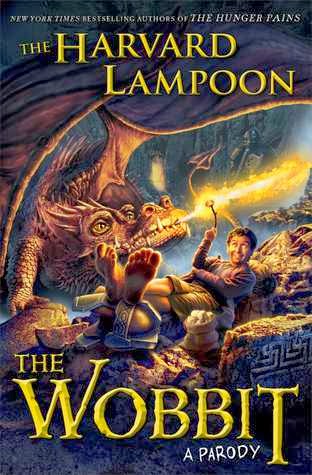 Publication Date: November 26, 2013
The sequel to the parody of the sequel to the prequel to The Lord of the Rings
When Aaron Sorkinshield and his band of Little People embark on a totally feasible quest to reclaim the hoard of Academy Awards stolen from them by the lonely Puff the Magic Dragon, senile wizard Dumbledalf suggests an unlikely and completely unqualified accomplice: Billy Bagboy, an unassuming wobbit dwelling in terrorist-riddled Wobbottabad.

Along the way, the company faces Internet trolls, moblins, one really big spider that must be at least an inch and a half wide, and worse. But as they journey from the wonders of Livinwell to the terrors of Jerkwood and beyond, Billy will find that there is more to him than anyone—Tolkien included—ever dreamed. Propelled to his destiny by a series of courageous adventures and indented paragraphs, Billy will set out on the greatest YOLO of all time . . . one that leads deep into the dark caverns hiding a mysterious man named Goldstein, who’s just trying to have a nice seder.

About the Author
The Harvard Lampoon debuted in February 1876 and is the world’s longest continually published humor magazine. Lampoon alumni include comedians Conan O’Brien, Andy Borowitz, Greg Daniels, Jim Downey, Al Jean, and B.J. Novak. Other alums have written for Saturday Night Live, The Simpsons, Futurama, Late Night with David Letterman, Seinfeld, 30 Rock, and dozens of other shows. The Harvard Lampoon is also the author of Nightlightand The Hunger Pains. Visit HarvardLampoon.com.

SOURCE:  PUBLISHER
MY THOUGHTS
REALLY LIKED IT
This isn’t so much a parody and it is more of a satire of current events and internet trolls.  It is somewhat based on The Hobbit with Aaron Sorenkinsheild and his little people quest for the gold (academy awards) that a dragon (PUFF!) controls. There quest, of course, this being an Internet meme, is a YOLO.   It contains everything from the Kardashians, Harry Potter to Star Wars with some middle earth memes thrown in for balance.  It is super sarcastic and makes fun of almost every flame war that occurs on the Internet these days.  I mean troll and flame wars are literal here!

The characters mirror those in The Hobbit, but just barely.  Bilbo Baggins is re imagined as Billy Bagboy, an obese troll, who considers eating as much as possible as his true occupation.  Gandalf has become Dumbledalf, in sort of a cross breeding with Dumbledore.  While Elrond is now L. Ron, purveyor of bad science fiction and you can guess the rest.  Overall, this had quite a few laughs if you are Internet friendly and adore The Hobbit.  I think it probably has an expiration date since a lot of the references will have died in a few years.

PO Boxes OK – US Only
Open only to those who can legally enter
Winning Entry will be verified prior to prize being awarded.
No purchase necessary.
You must be 13 or older to enter .
The winner will be chosen by rafflecopter and announced here as well as emailed and will have 48 hours to respond or a new winner will be chosen.
This giveaway is in no way associated with Facebook, Twitter, Rafflecopter or any other entity unless otherwise specified.
The number of eligible entries received determines the odds of winning.
Giveaway was organized by BookHounds and sponsored by  the publisher
VOID WHERE PROHIBITED BY LAW.