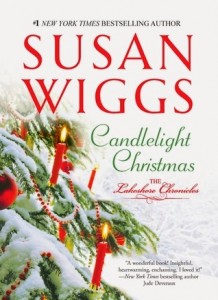 A single father who yearns to be a family man, Logan O’Donnell is determined to create the perfect Christmas for his son, Charlie. The entire O’Donnell clan arrives to spend the holidays in Avalon, a postcard-pretty town on the shores of Willow Lake, a place for the family to reconnect and rediscover the special gifts of the season.

One of the guests is a newcomer to Willow Lake— Darcy Fitzgerald. Sharp-witted, independent and intent on guarding her heart, she’s the last person Logan can see himself falling for. And Darcy is convinced that a relationship is the last thing she needs this Christmas.

Yet between the snowy silence of the winter woods, and toasty moments by a crackling fire, their two lonely hearts collide. The magic of the season brings them each a gift neither ever expected—a love to last a lifetime.

Susan Wiggs’s life is all about family, friends…and fiction. She’s been featured in the national media, including NPR’s Talk of the Nation, and is a popular speaker locally and nationally.

From the very start, her writings have illuminated the everyday dramas of ordinary people. At the age of eight, she self-published her first novel, entitled “A Book About Some Bad Kids.”

Today, she is an international best-selling, award-winning author, with millions of copies of her books in print in numerous countries. Her recent novel, Marrying Daisy Bellamy, took the #1 spot on the New York Times Bestseller List, and The Lakeshore Chronicles have won readers’ hearts around the globe. Her books celebrate the power of love, the timeless bonds of family and the fascinating nuances of human nature.

She lives with her husband and family at the water’s edge on an island in the Pacific Northwest, where she divides her time between sleeping and waking.

Logan O’Donnell stood on a platform one hundred feet in the air, preparing to shove his ten-year-old son off the edge. A light breeze shimmered through the canopy of trees, scattering leaves on the forest floor far below. A zip line cable, slender as a thread in a spider’s web, hung between the tree platforms, waiting. Below, Meerskill Falls crashed down a rocky gorge.

“There’s no way I’m going off this.” Logan’s son, Charlie, drew his shoulders up until they practically touched the edge of his helmet.

“Come on,” Logan said. “You told me you’d do it. The other kids had a ball. They’re all waiting for you on the other side, and I heard a rumor about a bag of Cheetos being passed around.”

“I changed my mind.” Charlie set his jaw in a way that was all too familiar to Logan. “No way. No W-A-Y-F.”

Logan knew the shtick, but he went along with it. “There’s no F in way, dude.”

“Aw, Charlie. It’s almost like flying. You like to fly, right?” Of course he did. Charlie’s stepfather was a pilot, after all. Logan crushed the thought. There were few things more depressing than thinking about the fact that your kid had a stepfather, even if the stepfather was an okay guy. Fortunately for Charlie, he’d ended up with a good one. But it was still depressing.

Charlie spent every summer with Logan. During the school year, he lived with his mom and stepfather in Oklahoma, a million miles away from Logan’s home in upstate New York. It sucked, living that far from his kid. Being without Charlie was like missing a limb.

When he did have his son with him, Logan tried to make the most of their time together. He planned the entire season around Charlie, and that included working as a volunteer counselor at Camp Kioga, helping out with the summer program for local kids and inner-city kids on scholarship. The zip line over Meerskill Falls was a new installation, and had already become everyone’s favorite feature. Nearly everyone.

“Hey, it’s the last day of camp. Your last chance to try the zip line.”


WANT TO WIN A COPY OF THIS BOOK?

OPEN TO US RESIDENTS ONLY
Open only to those who can legally enter
Winning Entry will be verified prior to prize being awarded. No purchase necessary.
You must be 18 or older to enter .
The winner will be chosen by rafflecopter and announced here as well as emailed and will have 48 hours to respond or a new winner will be chosen.
This giveaway is in no way associated with Facebook, Twitter, Rafflecopter or any other entity unless otherwise specified.
The number of eligible entries received determines the odds of winning.
Giveaway was organized by BookHounds and sponsored by the publisher.
VOID WHERE PROHIBITED BY LAW.