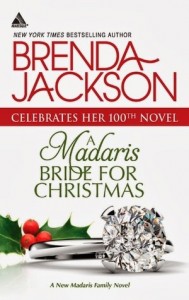 Synopsis:
IN HER 100TH BOOK, NEW YORK TIMES AND USA TODAY BESTSELLING AUTHOR blends heated sensuality and drama into a dazzling new novel featuring one of her most unforgettable Madaris heroes yet…
One by one, Madaris men have surrendered to the matchmaking schemes of Felicia Laverne Madaris, matriarch of the family. But Lee Madaris isn’t letting anyone else control his destiny. He’ll bring a bride of his own choosing to the family’s holiday gathering—if his hotel’s gorgeous new chef will agree to a marriage of convenience.
It’s not just the chance to work at the Strip’s hottest hotel that brought Carly Briggs to Vegas. Witnessing a crime in Miami may have made her a mob target. Though she’s reluctant to complicate their working relationship, Lee’s tempting offer is so hard to resist. And soon, desire is clouding their no-strings arrangement.
The danger that made Carly flee Miami is about to land at their door. So Carly and Lee must decide who to trust, when to let go—and whether a love they never anticipated is strong enough to pass the ultimate test.
Purchase links:
·         http://www.amazon.com/gp/search?keywords=9780373091430/
·         http://www.barnesandnoble.com/w/a-madaris-bride-for-christmas-brenda-jackson/1115072825?ean=9781460321096
·         http://www.indiebound.org/book/9780373091430
·         http://www.booksamillion.com/product/9780373091430
·         http://www.walmart.com/ip/24180600
About the author:
A New York Times and USA TODAY bestselling and award-winning author of more than seventy-five romance titles, Brenda is a recent retiree who divides her time between family, writing and traveling with her husband.
Website * Twitter  * Facebook
EXCERPT

Today was her twenty-eighth birthday, and she had decided to celebrate with a night on the town. She had even treated herself to a night at the Grand MD. It had to be the most beautiful hotel she had ever seen. Her room on the fiftieth floor was to die for and the service was excellent.

Carly had stumbled across this particular balcony a few weeks ago while on break. She loved the view, and it had become her favorite. There had been several other couples here earlier, enjoying the view as well, but they had departed, leaving her alone. She didn’t mind. It was the story of her life.

Carly forced the depressing thought from her mind.

After all, it was her birthday and she intended to have fun. So far it had been a beautiful day. Before leaving home this morning she’d gotten calls from Aunt Ruthie and Heather. They had remembered, and they were the only two people in her life that counted.

There was a party going on in one of the ballrooms upstairs. She could hear the music playing, a Marvin Gaye classic. She felt like dancing. What the heck. It was her birthday and she had every right to be silly if she wanted to.

Turning from the rail, she waltzed across the floor. She closed her eyes and pretended she was at a party, celebrating her birthday in style, dancing around a ballroom filled with tall, dark, handsome men. One would come forward, claim her hand and ask—

“May I have this dance?”

At the sound of the deep, husky voice, Carly’s eyes flew open and she stared into the most gorgeous pair of dark eyes she’d ever seen. And there was a very handsome face to go along with those eyes. Where on earth had he come from? She blinked, wondering if she was still clutched in the throes of her fantasy. She had to be.

“Are you real?” she asked, making sure she hadn’t conjured him up in her mind.

He smiled and the sight of the dimple in his chin nearly brought her to her knees. It definitely caused every hormone in her body to sizzle.

“Yes, I’m real. Now, how about that dance,” he said, taking her hand in his. A different song was playing now, this one by Luther Vandross.

Carly nodded her consent and he pulled her into his arms. The man was a total stranger. Had it not been her birthday, she would not have allowed him to hold her. But she had already decided that it was okay for her to act silly today. And it wasn’t every day that such a good-looking man asked her to dance. Not only was he handsome, but he smelled good too. And to top it off, they danced well together. The way their bodies swayed and moved against each other had her fighting a desire she hadn’t felt in close to four years.

OPEN TO US RESIDENTS ONLY
Open only to those who can legally enter
Winning Entry will be verified prior to prize being awarded. No purchase necessary.
You must be 18 or older to enter .
The winner will be chosen by rafflecopter and announced here as well as emailed and will have 48 hours to respond or a new winner will be chosen.
This giveaway is in no way associated with Facebook, Twitter, Rafflecopter or any other entity unless otherwise specified.
The number of eligible entries received determines the odds of winning.
Giveaway was organized by BookHounds and sponsored by ME.
VOID WHERE PROHIBITED BY LAW.