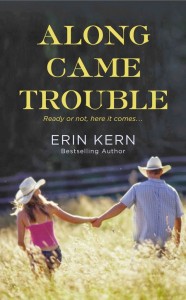 ALONG CAME TROUBLE by Erin Kern
November 19, 2013
Forever Mass Market; 9781455573929; $8.00
Elisa Cardoso longs for passion in her life. Though she’d much rather spend her days photographing the stunning Wyoming landscape, food photography is a lucrative, if uninspiring, way to pay her bills. But when her next assignment brings her face to face with sexy restaurant owner Brody McDermott, Elisa can’t deny the delicious effect he has on her.

From the minute Brody sees Elisa, he’s dying to unleash her inner bad girl. He knows there’s more to the sophisticated photographer than meets the eye. Now getting the sexy shutterbug into his bed is on his menu, but when she starts making her way into his heart-big problem. Love has been tricky for Brody, and he’s not too eager to try his luck again. But when a golden opportunity means Elisa may be leaving Trouble for good, can Brody find the courage to grab on to love . . . before it slips away?

Buy Links
Amazon
B&N
Bookish
IndieBound
EXCERPT
“Why do I always get the feeling you’re holding back around me?”
Her luscious lips parted and her brow furrowed. “What do you mean?”
“I can’t explain it.” His finger trailed along the edge of her jaw. “It’s like a part of you is afraid of me.”
She sucked in a deep breath through her parted lips. “Not afraid, just cautious.”
“Why do you feel the need to be cautious?”
She waited a moment, like she wanted to formulate a logical answer. “You make me feel things I’m not used to. I’m just not sure how to handle them.”
He stepped even closer to her, so that her sweet body heat fl owed around him like a blanket of sexuality. “Like what kind of things?”
The pulse beating beneath her neck sped up when his finger trailed down the column of her throat. “I don’t know. But my mind doesn’t know how to make sense of them.”
His mouth quirked in a small smile. “There’s your problem. You should stop thinking so much and allow yourself to feel.”
Oh, this woman would be wanton in bed. His finger alone elicited all kinds of reactions from her that had his body coming to life. Her pink tongue kept darting out and swiping across her lower lip, leaving it deliciously wet. After waiting for what felt like a lifetime, he gave in to his craving and leaned down. His mouth lowered to hers with a gentleness that contradicted the raging desire he felt for her. Her lips were soft, full and moist, and even more heavenly than he thought they would be.
She didn’t push him away, as he expected her to. Instead, her hand came up to grip his shoulder and her fingers dug into his muscles. The lady wanted him. She clutched at him with a desperation that had to be genuine. The knowledge had him pulling her even closer and slanting his mouth over hers even harder. His tongue probed the entrance of her hot mouth and she eagerly allowed him to enter.
Holy sweet mother.
She would not ruin this beautiful day by crying. She’d cried over the loss of her brother for years and had since told herself she’d become a stronger person than the lonely college kid she used to be.
“Even though we’re eight years apart, Marcello and I were closer than your average brother and sister. When he left it was like losing my best friend.” She’d never forget the feel of his arms wrapped so tightly around her neck, just minutes before he boarded the plane to South America. Then afterward, the emptiness in her heart as she walked out of the airport alone.
“Sounds to me like you made the right choice, though. How could you have taken care of him at that age?”
Elisa tucked a strand of hair behind her ear. “I know I did. My grandparents are very successful people. They’ve been able to provide him with a life that even my parents couldn’t. He lives in a huge house overlooking the city; he went to the best schools. He’s studying to be a doctor, for crying out loud. He hasn’t wanted for anything down there.”
Brody tilted her chin up with his index fi nger. “Except for you. You can’t keep carrying the guilt around. It’s eating you up.”
His bottomless eyes were so easy to fall into. More than once she’d found herself becoming hypnotized by them, and now was no different.
“How is it you always know the right thing to say?” she asked in a husky voice.
His thumb traced her lower lip. “Because I might have an idea of what you’re feeling.”
She sucked in a breath, and held it for a second. “Because of your divorce?” She would get this man to open up to her if it killed her. Had the dissolution of his marriage been so traumatic that he couldn’t even talk about it?
His gray eyes darkened for a moment, like a cloud of grief. “It’s not one of my prouder moments, no.”
She tilted her head and studied him. Did he blame himself? “What would you have to be ashamed
about? Sometimes things like that are unavoidable.”
He stepped even closer to her, so that his body heat wrapped her in a mind- tingling cocoon of sexuality. Day by day, Elisa’s willpower grew weaker and weaker. How much longer could she resist him? If he kept touching her, like he was now, she’d be too far gone.
“I can’t think clearly when I’m around you,” he murmured in a sexy, husky voice.
He couldn’t think? Her brain was mush.
His mouth hovered just a whisper away from hers, not touching but close enough to drive her out of her mind.
“Maybe I should just kiss you and put both of us out of our misery.” 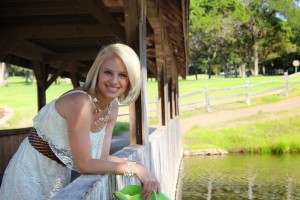 Erin Kern  was born in Houston, TX. but spent the majority of her life in the Bay Area. She married her high school sweetheart and began her writing career while being a stay-at-home mom to her daughter. Her first book, Looking for Trouble, was on the Amazon top 100 for four months, and on the indiereads.com top ten for four weeks. The second book in the Trouble series, Here Comes Trouble, was also a top seller on Amazon. Erin currently lives in North Texas with her husband and two children.
Social Media
Website
Facebook
Twitter
Goodreads
WANT TO WIN A COPY OF THIS BOOK + $25 GIFT CARD TO SHUTTERFLY!
Ends 11/26/13
Open TO  US RESIDENTS ONLY — no po boxes
Open only to those who can legally enter
Winning Entry will be verified prior to prize being awarded.
No purchase necessary.
You must be 18 or older to enter .
The winner will be chosen by rafflecopter and announced here as well as emailed and will have 48 hours to respond or a new winner will be chosen.
This giveaway is in no way associated with Facebook, Twitter, Rafflecopter or any other entity unless otherwise specified.
The number of eligible entries received determines the odds of winning.
Giveaway was organized by BookHounds and sponsored by the publisher
VOID WHERE PROHIBITED BY LAW.