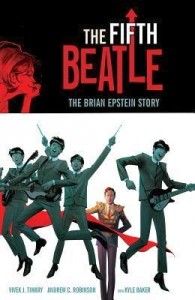 Publication Date: November 19, 2013
The Fifth Beatle is the untold true story of Brian Epstein, the visionary manager who discovered and guided The Beatles—from their gigs in a tiny cellar in Liverpool to unprecedented international stardom. Yet more than merely the story of “The Man Who Made The Beatles,” The Fifth Beatle is an uplifting, tragic, and ultimately inspirational human story about the struggle to overcome seemingly insurmountable odds. Brian himself died painfully lonely at the young age of thirty-two, having helped The Beatles prove through “Sergeant Pepper’s Lonely Hearts Club Band” that pop music could be an inspirational art form. He was homosexual when it was a felony to be so in the United Kingdom, Jewish at a time of anti-Semitism, and from Liverpool when it was considered just a dingy port town.

SOURCE:  PUBLISHER
MY THOUGHTS:  LOVE IT

I think I have read almost every book written about the Beatles but I seem to have missed out reading in detail about Brian Epstein’s life.  This wonderfully illustrated story about his life achieves what words alone cannot.  It shows in graphic detail exactly how hard it was for him to be two of the worse things at this point in history:  a Jewish homosexual.  He was bullied and tortured but seems to overcome these issues by doggedly pursuing success by all means to create the biggest band in the world.  He is cunning and determined in his plan to make them famous.

The illustrations are perfectly suited and the colors, primarily red, black and white fit the time period with the pop images that I have come to associate with that time period.  It also shows exactly how damaged Epstein was since being gay during this time was illegal and he in turn resorted to drug to mask his pain.  I don’t know if Moxie really existed as just one person, but her sparkling personality did much to help the narration.  I really enjoyed this one and I think that it would make an excellent gift for any Beatle’s fan