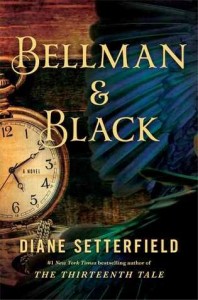 Publication Date: November 5, 2013
ONE MOMENT IN TIME CAN HAUNT YOU FOREVER.

Caught up in a moment of boyhood competition, William Bellman recklessly aims his slingshot at a rook resting on a branch, killing the bird instantly. It is a small but cruel act, and is soon forgotten. By the time he is grown, with a wife and children of his own, William seems to have put the whole incident behind him. It was as if he never killed the thing at all. But rooks don’t forget . . .

Years later, when a stranger mysteriously enters William’s life, his fortunes begin to turn—and the terrible and unforeseen consequences of his past indiscretion take root. In a desperate bid to save the only precious thing he has left, he enters into a rather strange bargain, with an even stranger partner. Together, they found a decidedly macabre business.

And Bellman & Black is born.

Buy this book on Amazon

William Bellman is the poor relation in a family built on textiles.  His cousin has no interest in the business, so he is essentially adopted by his uncle and through wit and intelligence works his way up the corporate ladder, eventually take over the mill and expanding it to ever increasing profitability.  The story starts off with an incident in which the young Bellman kills a rook (like a raven or crow) and that small act has repercussions though out his life.  The rook haunts him and his family through out his life time.  When a plague hits his village, his wife and most of his children are taken but one is spared.  In desperation, he makes a deal with the mysterious Mr. Black and moves to London.

Set in Victorian London, the tale is full of gothic creepiness but there is not much of a ghost, per se. The rook is a reoccurring character and usually a bringer of bad news but I could never figure out if the mysterious Mr. Black is the rook in flesh.  The are lots and lots of little asides and details about Bellman’s life and the story is interesting but there just didn’t seem to be a story that I could get into.  The writing is absolutely gorgeous though and the dialogue and descriptions are worth the investment of time.