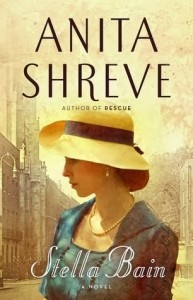 An epic story, set against the backdrop of World War I, from bestselling author Anita Shreve.

When an American woman, Stella Bain, is found suffering from severe shell shock in an exclusive garden in London, surgeon August Bridge and his wife selflessly agree to take her in.

A gesture of goodwill turns into something more as Bridge quickly develops a clinical interest in his houseguest. Stella had been working as a nurse’s aide near the front, but she can’t remember anything prior to four months earlier when she was found wounded on a French battlefield.

In a narrative that takes us from London to America and back again, Shreve has created an engrossing and wrenching tale about love and the meaning of memory, set against the haunting backdrop of a war that destroyed an entire generation.

About the Author
Anita Shreve is the acclaimed author of 16 previous novels, including Rescue, A Change in Altitude; Testimony; The Pilot’s Wife, which was a selection of Oprah’s Book Club; and The Weight of Water, which was a finalist for England’s Orange prize. She lives in Massachusetts.

After working on the French front in  triage during World War I, Stella Bain wakes up near a doctor’s house in London, not remembering exactly how she got there, but is taken in by the doctor and his wife.  She is suffering from some sort of head injury, which the surgeon, August Bridge, specializes. Stella knows something is wrong and does remember that she has a goal to reach by an instinct that tells her to go to the Admiralty which doesn’t initially make sense.  Dr. Bridge helps her by “talk therapy” and little things start to click as well as she starts to draw and those images spark memories of a horrible incident at home in America and the fact that she has children.

Finally connecting her memories and feeling with her past, she realizes that she is actually Etna Bliss Van Tassel and has fled from her abusive husband after her teen daughter reveals that her father forced her to lie about asexual  situation with one of his business rivals.  The story that follows is quite incredible as Etna must travel back to America to regain custody of her children and put her life back in order.  There is such detail in the plot that you won’t realize the depth of the story until after you put the book down.

I always find that any time I read one of Shreve’s books, they tend to stick with me and her economy and use of words is just spectacular.  Every word is used is to the point and the story telling concise, but not so much that you lose the detail of each page.   This is one of those meals where every ingredient is used with maximum effect and the effort pays off while not making you feel you ate too much.  Now, for another year’s wait until I get another one.

Want to win my ARC copy?

US only, PO Boxes ok!
Open only to those who can legally enter
Winning Entry will be verified prior to prize being awarded. No purchase necessary.
You must be 18 or older to enter .
The winner will be chosen by rafflecopter and announced here as well as emailed and will have 48 hours to respond or a new winner will be chosen.
This giveaway is in no way associated with Facebook, Twitter, Rafflecopter or any other entity unless otherwise specified.
The number of eligible entries received determines the odds of winning.
Giveaway was organized by BookHounds and sponsored by the publisher
VOID WHERE PROHIBITED BY LAW.

I received this book from the publisher at no charge and in no way influenced my review.  If you are considering purchasing this book or anything else from Amazon, please use my link above since I earn a very small percentage of the sale which helps pay for shipping my giveaways!