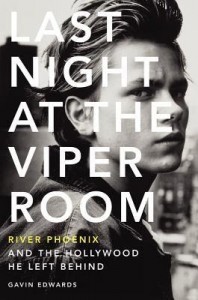 In Last Night at the Viper Room, acclaimed author and journalist Gavin Edwards vividly recounts the life and tragic death of acclaimed actor River Phoenix—a teen idol on the fast track to Hollywood royalty who died of a drug overdose in front of West Hollywood’s storied club, the Viper Room, at the age of 23.

Last Night at the Viper Room explores the young star’s life, including his childhood in Venezuela growing up under the aegis of the cultish Children of God. Putting him at the center of a new generation of leading men emerging in the early 1990s— including Johnny Depp, Keanu Reeves, Brad Pitt, Nicolas Cage, and Leonardo DiCaprio—Gavin Edwards traces the Academy Award nominee’s meteoric rise, couches him in an examination of the 1990s, and illuminates his lasting legacy on Hollywood and popular culture itself.

Buy this book on Amazon: Last Night at the Viper Room:

The book “Last Night At The Viper Room” by Gavin Edwards got me off to the wrong start when I initially thought that it was about a celebrity nightclub, such as Studio 54 and CBGB’s. Actually its about River Phoenix. (My fault: I should have paid more attention to the dust jacket). The most I ever knew about the place and the person was a spot on the sidewalk that tour guides point out. It’s just outside the Viper’s door where River Phoenix collapsed and died from a drug overdose.

I felt that the book was overly thin, probably because Phoenix lived such a short time and had relatively few major films in which he was featured (most notably Indiana Jones and the Last Crusade).

I enjoyed the interesting tidbits about the history of the Viper Room and the religious cults that emerged in Southern Calif.