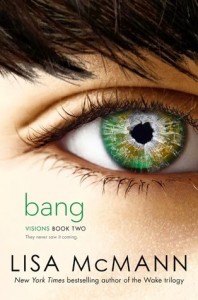 What Sawyer’s seeing might mean murder. The second book in a series from the New York Times bestselling author of the Wake trilogy.

Jules should be happy. She saved a lot of people’s lives and she’s finally with Sawyer, pretty much the guy of her dreams. But the nightmare’s not over, because she somehow managed to pass the psycho vision stuff to Sawyer. Excellent.

Feeling responsible for what he’s going through and knowing that people’s lives are at stake, Jules is determined to help him figure it all out. But Sawyer’s vision is so awful he can barely describe it, much less make sense of it. All he can tell her is there’s a gun, and eleven ear-splitting shots. Bang.

Jules and Sawyer have to work out the details fast, because the visions are getting worse and that means only one thing: time is running out. But every clue they see takes them down the wrong path. If they can’t prevent the vision from happening, lives will be lost. And they may be among the casualties…

Lisa McMann is the New York Times bestselling author of the Wake trilogy, Cryer’s Cross, Dead to You, the Visions series, and the middle grade dystopian fantasy series The Unwanteds. She lives with her family in the Phoenix area. Read more about Lisa and find her blog through her website at LisaMcMann.com or, better yet, find her on Facebook (Facebook.com/McMannFan) or follow her on Twitter (@Lisa_McMann).

My THOUGHTS
LOVED IT

Bang picks up a few weeks after Crash and Jules is no longer seeing horrendous visions of death except now Sawyer has the sight.  Instead of seeing the death, he hears eleven shots and vaguely describes a school shooting to Jules.  Of course, Jules is on restriction after crashing the Meat Ball (food truck), and no longer has a cell phone, so their connections have to take place at school.  Sawyer does manage to get a prepaid cell phone to Jules so the pair can talk and text when they need to without their parents knowing.

Jules enlists the help of her siblings, Trey and Rowan, to figure out where Sawyer’s vision takes place, but the vision is coming more often which means time is running out.   Sawyer sees certain trees in the background which helps them narrow down the location to a college. This is fast paced and will have your heart racing as they try to figure out the locations and see if they can save the potential eleven victims.

I really enjoyed this story and centered around a school shooting that seems ripped out of the headlines and with an undercurrent of social commentary that is going on today.  The whole theme is so true that it seems it happened someplace recently.  The ending left open another installment and I really can’t wait to see where this takes these kids.  I can’t explain too much of it since it would give away a lot of the plot.