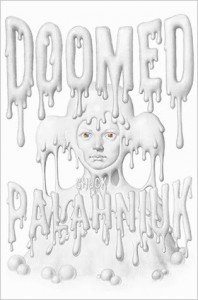 Publication Date: October 8, 2013
Madison Spencer, the liveliest and snarkiest dead girl in the universe, continues the afterlife adventure begun in Chuck Palahniuk’s bestsellerDamned. Just as that novel brought us a brilliant Hell that only he could imagine, Doomed is a dark and twisted apocalyptic vision from this provocative storyteller.

The bestselling Damned chronicled Madison’s journey across the unspeakable (and really gross) landscape of the afterlife to confront the Devil himself. But her story isn’t over yet. In a series of electronic dispatches from the Great Beyond, Doomed describes the ultimate showdown between Good and Evil.
After a Halloween ritual gone awry, Madison finds herself trapped in Purgatory—or, as mortals like you and I know it, Earth. She can see and hear every detail of the world she left behind, yet she’s invisible to everyone who’s still alive. Not only do people look right through her, they walk right through her as well. The upside is that, no longer subject to physical limitations, she can pass through doors and walls. Her first stop is her parents’ luxurious apartment, where she encounters the ghost of her long-deceased grandmother. For Madison, the encounter triggers memories of the awful summer she spent upstate with Nana Minnie and her grandfather, Papadaddy. As she revisits the painful truth of what transpired over those months (including a disturbing and finally fatal meeting in a rest stop’s fetid men’s room, in which . . . well, never mind), her saga of eternal damnation takes on a new and sinister meaning. Satan has had Madison in his sights from the very beginning: through her and her narcissistic celebrity parents, he plans to engineer an era of eternal damnation. For everyone.
Once again, our unconventional but plucky heroine must face her fears and gather her wits for the battle of a lifetime. Dante Alighieri, watch your back; Chuck Palahniuk is gaining on you.

About the Author
CHUCK PALAHNIUK‘s twelve bestselling novels—Damned, Tell-All, Pygmy, Snuff, Rant, Haunted, Diary, Lullaby, Choke, Invisible Monsters, Survivor, and Fight Club—have sold more than five million copies in the United States. He is also the author of Fugitives and Refugees, published as part of the Crown Journey Series, and the nonfiction collection Stranger Than Fiction. He lives in the Pacific Northwest.

SOURCE:  PUBLISHER
MY THOUGHTS
LOVED IT

Madison is back and is now guiding you with after-life etiquette though her blog postings on how to get into heaven. Except what she is telling you will actually bring you to a hotter afterlife.  Through her brief stint in the telemarketing department of hell, she is posed to take over in a coup attempt that Satan would admire if he were not the victim.  Realizing that being damned only takes a few steps, she reconnects with her parents and gives them the “secret” to the afterlife in hopes that the family can reunite.  Except, she doesn’t count on her parents’ evangelistic take on her rules for salvation and in the process sends more people to hell than you can possibly imagine.

This second installment of the Damned trilogy continues Madison snarky take on life and the afterlife.  At the core of her issues is that fact that no matter how bright and intelligent she is, she is still a twelve year old girl who only wants the love of her mommy and daddy.  All this mixed with social commentary on global domination by conglomerates and you have a weird morality tale.  I though Madison regressed a bit in this one and didn’t see much of her strength like in Damned. I did learn a lot about her life on earth, some of which will make you wonder just exactly how she ended up in hell.

Disclosure
I received this book from the publisher at no charge and in no way influenced my review.  If you are considering purchasing this book or anything else from Amazon, please use my link above since I earn a very small percentage of the sale which helps pay for shipping my giveaways!