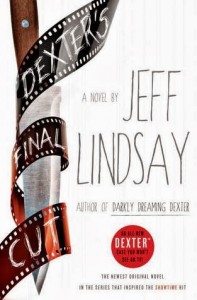 Publication Date: September 17, 2013
With 1.7 million copies of the Dexter novels sold, and ever-increasing critical acclaim, Jeff Lindsay returns to his groundbreaking and beloved character with his most entertaining book yet. Get ready for a grisly send-up of Hollywood, and a full dose of dark Dexter wit.
Lights. Camera. Mayhem. You won’t find this story on television.
Hollywood gets more than it bargained for when television’s hottest star arrives at the Miami Police Department and develops an intense, professional interest in a camera-shy blood spatter analyst named Dexter Morgan.
Mega-star Robert Chase is famous for losing himself in his characters. When he and a group of actors descend on the Miami Police Department for “research,” Chase becomes fixated on Dexter Morgan, the blood spatter analyst with a sweet tooth for doughnuts and a seemingly average life. To perfect his role, Chase is obsessed with shadowing Dexter’s every move and learning what really makes him tick. There is just one tiny problem . . . Dexter’s favorite hobby involves hunting down the worst killers to escape legal justice, and introducing them to his special brand of playtime. It’s a secret best kept out of the spotlight and away from the prying eyes of bloated Hollywood egos if Dexter wants to stay out of the electric chair. The last thing he needs is bright lights and the paparazzi. . . but even Dexter isn’t immune to the call of fame.
Jeff Lindsay’s razor sharp, devilish wit, and immaculate pacing prove that he is in a class of his own, and this new novel is his most masterful creation yet.

About the Author
JEFF LINDSAY is the New York Times best-selling author and creator of the Dexter novels, most recently Double Dexter. He lives in south Florida with his wife and three daughters. His novels are the inspiration for the hit Showtime and CBS series Dexter.

SOURCE:  AMAZON VINE
MY THOUGHTS
LOVED IT
Deb and Dexter have been corralled into being film consultants by their boss with two Hollywood actors on the downswing.  Robert Chase, a handsome leading man, is going to play a Dexter-like character on a new police show.  His female counterpart, Jackie Forrest, is shadowing Deb.  Dexter is falling in lust with Jackie.  I am not sure that Dexter can love, so this is the next best thing.  When bodies start showing up that resemble Jackie, Dexter’s Dark Passenger goes on high alert.
I think Dexter’s lust got the better of him in the latest installment. He isn’t the devious Dexter from the past.  Rita comes off as a ditzy, blundering fool, Astor is a pre-teen full of herself and Cody is trying his best to be mini-Dexter.  When Astor meets the heart-throb, Robert (not Rob or Bob) Chase, she attached herself to him like a limpet on a pier.  It isn’t until it is almost too late, that Dexter discovers the man’s true perversions.  All I can say is ICK!  I did find myself laughing quite a bit while reading this one and it is truly an enjoyable read.  Of course, it ends with a cliff hanger, so you can expect another installment next year.