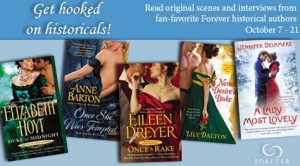 Welcome to the GET HOOKED ON HISTORICALS with excerpts, inteviews and giveaways from some of my favorite historical romance authors!
“If you had to ‘cast’ a Hollywood hunk as a historical hero, who would you choose and what role would they play?”
Jennifer Delamere, A LADY MOST LOVELY:
I’d choose Chris Hemsworth. He’s known for playing the warrior god Thor, but he could totally pull off the role of a roguish earl with an undiscovered heart of gold. (Have you seen those photos of him with his little baby? Adorable!)

A Lady Most Lovely
A LADY MOST LOVELY by Jennifer Delamere
September 24, 2013; Forever/ Mass Market; $8.00; 978-1-4555-1896-8
Socialite Margaret Vaughn agrees to marry a rich man to save her family’s estate, but then her fiancé turns out to be just another poor social climber. Even after amassing a fortune, Tom Poole hasn’t forgotten his humble beginnings. Taken with Margaret’s beauty and grace, Tom offers her financial assistance—but his interest is not strictly business. Can he convince the proper, refined lady that they despite their social differences, they are a match made in heaven?
Bio: The youngest child of a Navy pilot and a journalist, Jennifer acquired a love of adventure and an excitement for learning that continues to this day. She’s lived in three countries and traveled throughout the U.S. An avid reader of classics and historical fiction, she also enjoys biographies and histories, which she mines for the vivid details to bring to life the characters and places in her books. She resides with her husband in North Carolina–where, when not writing or dreaming up romantic adventures for her characters, she can be found fantasizing about her next ski trip or European vacation.
Buy links:
Amazon *  IndieBound * iTunes
Social Media:
Facebook  * Twitter  * Goodreads
Lily Dalton, NEVER DESIRE A DUKE:

I think Hugh Jackman would make a great Duke. Yes, he is masculine and heart-stoppingly handsome, but not just that. He displays the most attractive mix of intelligence and humor and his eyes. He can also turn ferocious in a blink. I’d love to see him staring at me from across a crowded ballroom. **Swoon!**

Never Desire a Duke
NEVER DESIRE A DUKE by Lily Dalton
September 24, 2013; Forever/ Mass Market; $6.00; 978-1-4555-2401-3
Lady Sophia has long been estranged from her husband, the Duke of Claxton, who has never forgiven himself for the youthful mistake that ruined their marriage. After nearly a year abroad, the reformed rogue vows to win back the only woman he’s ever truly loved. He’ll do whatever it takes to prove he can be the honorable husband she deserves—and the passionate lover she desires. Can they rekindle the flame that burned so bright and find a new path to forever?
Bio: Lily Dalton grew up as an Army brat, moving from place to place. Her first stop after relocating was always the local library, where she could hang out with familiar friends: Books! Lily has an English degree from Texas A & M University and after graduation worked as a legal assistant in the fields of accident reconstruction and litigation. She now lives in Houston, Texas, with her family. When she isn’t at work on her next manuscript, she spends her time trying out new recipes, cheering on her favorite Texas football teams and collecting old dishes, vintage linens and other fine “junque” from thrift stores and flea markets.
Buy links:
Amazon * Barnes & Noble * IndieBound * iTunes

Social Media:
Facebook * Twitter *  Goodreads
Anne Barton, ONCE SHE WAS TEMPTED:
Chris Pine would be perfect as a Fleet Commander in the Royal Navy. He’s already proven himself aboard the S.S. Enterprise, and we know he looks good in uniform.

Once She Was Tempted
ONCE SHE WAS TEMPTED by Anne Barton
October 29, 2013; Forever/Mass Market; $8.00; 978-1-4555-1330-7
In desperate need of money for her sick mother, Daphne Honeycote had posed for two scandalous portraits. Now she must hide her secret to save the Honeycote family name. Benjamin Elliot recognizes the stunning beauty from the beauty the instant he meets her. His possession of the painting makes him an insufferable thorn in her side—and yet he may be her best chance at finding the canvas’s companion. As she becomes drawn to the dark-tempered earl, can Daphne risk laying bare the secrets of her heart?
Bio: Anne Barton began swiping romance novels off her mom’s bookshelf as a teenager, so when she had the chance to spend a semester in London-home to her favorite heroes-she packed her bags and promptly fell in love with the city, its history, and its pubs. She dreamed of writing romance, but somehow ended up a software analyst instead.

Fortunately, a few years and a few careers later, Anne found her way back to writing the stories she loves and in 2011 won the Romance Writers of America’s Golden Heart® for Regency Historical Romance. She lives in Maryland with her husband (who, sadly, is not a peer of the realm-but a great guy nonetheless) and her three children, who try valiantly not to roll their eyes whenever she quotes Jane Austen. Her weaknesses include reality TV, cute-but-impractical shoes, and caffeinated beverages of all kinds.

Social Media:
Facebook * Twitter *  Goodreads
Elizabeth Hoyt, DUKE OF MIDNIGHT:
Tom Hiddleston because he looks really good in a goatee…even though no one wore facial hair in the Georgian time period. Maybe I could write a Elizabethan just for him?

Duke of Midnight
DUKE OF MIDNIGHT by Elizabeth Hoyt
October 15, 2013; GCP/Mass Market; $8.00; 978-1-4555-0834-1
By day Maximus Batten is the Duke of Wakefield, a powerful member of Parliament. But by night he is the Ghost of St. Giles, prowling the grim alleys of St. Giles, ever on the hunt for the man who brutally murdered his parents twenty years ago. When he rescues Artemis Greaves and her cousin, the fiery young woman discovers his secret and threatens to expose Maximus unless he uses his influence to free her imprisoned brother. But blackmailing a powerful duke isn’t without risks. Now that she has the tiger by the tail, can she withstand his ire—or the temptation of his embrace?
Bio: The author of the New York Times bestselling Maiden Lane series and the Legend of Four Soldiers series as well as the Prince Trilogy, Elizabeth Hoyt writes “mesmerizing” (Publishers Weekly) historical romances. She also pens deliciously fun contemporary romances under the name Julia Harper. Elizabeth lives in central Illinois with three untrained dogs, two angelic but bickering children, and one long-suffering husband. Central Illinois can be less than exciting, and Elizabeth is always more than happy to receive missives from her readers. You can write to her at: P.O. Box 17134, Urbana, IL 61873.

My friends would say I would cast Hugh Jackman in anything because he’s..well, Hugh Jackman. But that simply isn’t true. So far I’ve only cast him as one of my historical heroes, Jack Wyndham, of BARELY A LADY. For Ian Ferguson of my ONCE A RAKE, the only person I ever seriously considered was a young Liam Neeson. No one else has the size, the effortless strength, and the kind eyes that Neeson does. And Ian isn’t really gorgeous. He’s manly. Can you think of anybody who does ‘manly’ better?

Once a Rake
ONCE A RAKE by Eileen Dreyer
October 29, 2013; Forever/Mass Market; $8.00; 978-1-4555-1932-3
Accused of trying to kill the Duke of Wellington, Colonel Ian Ferguson is now a fugitive—from the law, the army, and the cunning assassin who hunts him. Wounded and miles from his allies, Ian finds himself at the mercy of an impoverished country wife. Lady Sarah Clarke knows she should turn him in, but a single, delirious kiss shatters her resolve…and awakens a passion that neither of them can escape.
Bio: New York Times best-selling author Eileen Dreyer has won five RITA Awards from the Romance Writers of America, which secures her  fourth place in the Romance Writers of America prestigious Hall of Fame. Eileen is an addicted traveler, having sung in some of the best Irish pubs in the world.  Eileen also writes as Kathleen Korbel and has over three million books in print worldwide. Born and raised in Missouri, she lives in St. Louis County with her husband Rick and her two children.

Facebook * Twitter *  Goodreads
Want to win a set of these books?
Ends 10/28/13
US only,  PO Boxes OK!
Open only to those who can legally enter
Winning Entry will be verified prior to prize being awarded. No purchase necessary.
You must be 18 or older to enter .
The winner will be chosen by rafflecopter and announced here as well as emailed and will have 48 hours to respond or a new winner will be chosen.
This giveaway is in no way associated with Facebook, Twitter, Rafflecopter or any other entity unless otherwise specified.
The number of eligible entries received determines the odds of winning.
Giveaway was organized by BookHounds and sponsored by the publisher
VOID WHERE PROHIBITED BY LAW.
Prize is one copy each of  Duke of Midnight, Once a Rake, A Lady Most Lovely, Once She Was Tempted, and Never Desire a Duke