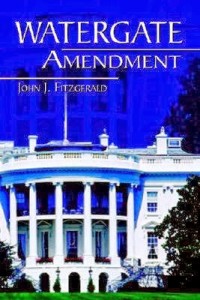 A CLOSER LOOK AT THE WATERGATE SCANDAL
-After 20 Years of Research, Author Writes Political Thriller Surrounding Watergate and the 25th Amendment
The Watergate Scandal. A presidential disaster that still hasn’t met its equal. Involving the only resignation of a U.S. president, the Watergate Scandal rocked America’s faith in the political system. And perhaps for the better.
When John Fitzgerald first heard about the Watergate Scandal, he couldn’t understand why Nixon wouldn’t try to burn the tapes and cover-up the incident. In seeking the answer to this small question, he ended up uncovering not only information about Nixon and Watergate, but smaller pieces to the impossible puzzle that included Nelson Rockefeller, Henry Kissinger, and, above all, the importance of the 25th Amendment. His 20 years of collected research on these events led him to write Watergate Amendment. In a suspenseful political thriller, Fitzgerald attempts to answer what happened, and what went wrong, all those years ago.
In an eye-opening interview, Fitzgerald can discuss, among other topics:
·   How the 25th Amendment could’ve played into the Watergate scandal
·   The possible role that Nelson Rockefeller played in Nixon’s resignation
·   How Nixon’s resignation wasn’t done to U.S. protocol
·   Manipulated elections
·   Political conspiracy theories
John Fitzgerald spent 20 years researching and doing work on Watergate Amendment. He served as a Paratrooper in Vietnam and then worked in manufacturing and marketing in the plastics industry, including munitions for the U.S. Navy.  He has published another book, Thanksgiving Breakfast, and is currently writing a third historical novel. He currently resides in Oregonia, OH with his wife.
For more information on Watergate Amendment, please visit watergateamendment.com
Watergate Amendment is available in paperback and ebook form on www.Amazon.com.

1. What is the first book you remember reading by yourself as a child?
The day they shook the plum tree.

2. What are you reading right now?
Sarum

3. How does your garden grow?
Very green with lots o f spices.

4. What is the last thing you Googled?
Information about mules.

5. What makes you cringe?
The squeal of car tires

Want to win a copy of this book?

Ends 10/27/13
US only,  PO Boxes OK!
Open only to those who can legally enter
Winning Entry will be verified prior to prize being awarded. No purchase necessary.
You must be 18 or older to enter .
The winner will be chosen by rafflecopter and announced here as well as emailed and will have 48 hours to respond or a new winner will be chosen.
This giveaway is in no way associated with Facebook, Twitter, Rafflecopter or any other entity unless otherwise specified.
The number of eligible entries received determines the odds of winning.
Giveaway was organized by BookHounds and sponsored by the publisher
VOID WHERE PROHIBITED BY LAW.