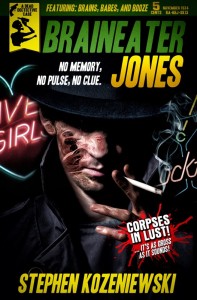 Braineater Jones wakes up face down in a swimming pool with no memory of his former life, how he died, or why he’s now a zombie. With a smart-aleck severed head as a partner, Jones descends into the undead ghetto to solve his own murder.

But Jones’s investigation is complicated by his crippling addiction to human flesh. Like all walking corpses, he discovers that only a stiff drink can soothe his cravings. Unfortunately, finding liquor during Prohibition is costly and dangerous. From his Mason jar, the cantankerous Old Man rules the only speakeasy in the city that caters to the postmortem crowd.

Cracking this case is a tall order. Braineater Jones won’t get out alive, but if he plays his cards right, he might manage to salvage the last scraps of his humanity. 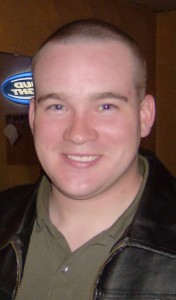 About the Author
Stephen Kozeniewski lives with his wife of 9 years and cat of 22 pounds in Pennsylvania, the birthplace of the modern zombie. He was born to the soothing strains of “Boogie With Stu” even though The Who are far superior to Zep, for reasons that he doesn’t even really want to get into right now. During his time as a Field Artillery officer, he served for three years in Oklahoma and one in Iraq, where due to what he assumes was a clerical error, he was awarded the Bronze Star. The depiction of addiction in his fiction is strongly informed by the three years he spent working at a substance abuse clinic, an experience which also ensures that he employs strict moderation when enjoying the occasional highball of Old Crow. He is also a classically trained linguist, which sounds much more impressive than saying his bachelor’s degree is in German.

Possibly THE MONSTER AT THE END OF THIS BOOK? I’m pretty sure the first novel I read was A STUDY IN SCARLET.

THE MAGUS by John Fowles. Oh, and I guess I started ANGLE OF REPOSE by Wallace Stegner last night because I was bored with THE MAGUS. Oh, and I’m listening to NATIVE SON by Richard Wright in the car. Oh, and I’m also halfway through WINGS OF THE DOVE by Henry James on my iPhone.

“How does your garden grow?”

Being told Zep is better than The Who.