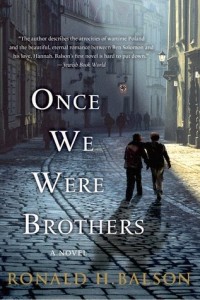 Elliot Rosenzweig, a respected civic leader and wealthy philanthropist, is attending a fundraiser when he is suddenly accosted and accused of being a former Nazi SS officer named Otto Piatek, the Butcher of Zamosc. Although the charges are denounced as preposterous, his accuser is convinced he is right and engages attorney Catherine Lockhart to bring Rosenzweig to justice. Solomon persuades attorney Catherine Lockhart to take his case, revealing that the true Piatek was abandoned as a child and raised by Solomon’s own family only to betray them during the Nazi occupation. But has Solomon accused the right man?

Once We Were Brothers is Ronald H. Balson’s compelling tale of two boys and a family who struggle to survive in war-torn Poland, and a young love that struggles to endure the unspeakable cruelty of the Holocaust. Two lives, two worlds, and sixty years converge in an explosive race to redemption that makes for a moving and powerful tale of love, survival, and ultimately the triumph of the human spirit.

Chicago, Illinois, September 2004
BEN SOLOMON STOOD BEFORE his bathroom mirror fumbling with his bow tie. He was eighty-three years old and getting dressed for Judgment Day. Years had come and gone since he had last worn his tuxedo, but then, Judgment Day was a black tie affair.
He uttered a Polish phrase to the man in the mirror and reached into his pocket to reexamine his pricey ticket.
Lyric Opera of Chicago. Opening Night Gala, September 26, 2004. La Forza del Destino. Main Floor, Aisle 2, Row kk, Seat 103—a seat he did not intend to occupy. Truth be told, he didn’t care much for opera. The ticket had set him back five hundred dollars, a goodly sum for a pensioner.
He pulled back the cuff of his shirtsleeve to check the time on his watch, a silver-band Citizen given to him when he retired from the Chicago Park District eight years ago. Four thirty—still two hours until the doors would open. He walked into his living room.
The windows of his modest one-bedroom apartment faced east, toward Lake Michigan and the row of condominium towers that stretched north in a line from the Loop to Thorndale Avenue like a stand of Midwest corn. The late-afternoon sun laid a track of shadows across Lake Shore Drive and onto the lush grass of the Waveland Golf Course, where he’d worked as a starter for almost fifty years. To his right, in the mirrored calm of Belmont Harbor, the luxury cruisers rested comfortably in their slips. He lingered. How he loved that view. He conceded that he might be looking at it for the last time.
Once more he checked his appearance in the mirror. He asked Hannah if he looked all right. Was he dapper? He wished she were there to answer.
Underneath his sweaters, in the bottom drawer of his bureau, lay a cardboard cigar box. Setting the box on the bureau top, he lifted the lid and removed a German P08 Luger, World War II vintage, in mint condition, purchased at an antique gun show for $1,250. Another hit to his savings account. He stuffed the pistol in his belt beneath his cummerbund.
Five o’clock. Time to walk to the corner, flag a southbound taxi, and join up with the glitterati at the “undisputed jewel of the social season.”

Ronald H. Balson is an attorney practicing with the firm of Stone, Pogrund and Korey in Chicago. An adjunct professor of business law at the University of Chicago for twenty-five years, Balson now lectures on trial advocacy in federal trial bar courses.

A few years ago, Balson was hired by his Chicago law firm to represent it in a case centered in southern Poland, the location of his book. For the next four years, he made multiple trips back and forth, and while there, he interviewed witnesses, studied documents and came to know more about the town of Zamosc. He learned that, during the World War II years, the Polish culture and country were destroyed and “sadness still pervades” there.

Balson started his own publishing company, Berwick Court, in order to self-publish his book, and as word of mouth spread, Once We Were Brothers became a runaway bestseller. St. Martin’s Press Griffin will now be publishing the trade paperback edition this October 2013.

Website *  Twitter *  Facebook  * Goodreads
WANT TO WIN A COPY OF THIS BOOK?
Ends 10/23/13
US only, no PO Boxes
Open only to those who can legally enter
Winning Entry will be verified prior to prize being awarded. No purchase necessary.
You must be 18 or older to enter .
The winner will be chosen by rafflecopter and announced here as well as emailed and will have 48 hours to respond or a new winner will be chosen.
This giveaway is in no way associated with Facebook, Twitter, Rafflecopter or any other entity unless otherwise specified.
The number of eligible entries received determines the odds of winning.
Giveaway was organized by BookHounds and sponsored by the publisher
VOID WHERE PROHIBITED BY LAW.