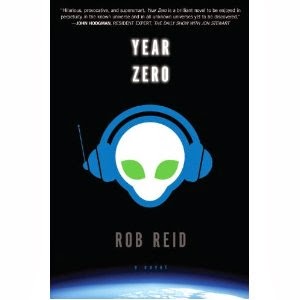 Earth sucks at almost everything….except music.  Now the universe wants to keep the music but get rid of Earth…..

Nick Carter, no, not the one from the Back Street Boys, but a low level lawyer working in a  entertainment law firm, gets a visit from a nun and a mullah.  Well, not exactly those for real, but  two extraterrestrial trying to blend in. Yeah, they got that wrong, so when Carly and Frampton, the two spacelings, pop into Nick’s office to try and fix an issue with music copyright laws and the universe, things get a bit weird.  The major issue is that US copyright laws for music has bankrupted the universe because of the fines and fees for every person in the galaxy having downloaded every song in existence. The leader of the universe just plan to do away with Earth in order to avoid those fees and fines.  Nick must solve this issue or the world  will face imminent destruction and he will never get to date Manda, the hot,  indie girl down the hall.

Also, hot on Nick’s trail is an evil Parrot named Paulie (not Polly!), yes, but not really a parrot, just a disguise used by another alien in order to get to him.  I sincerely hope this is a reference to my beloved Monty Python.  Nick is also being surveyed and finds an unusual vacuum cleaner in his apartment as well as a unique gadget called a stereopticon that contains all known facts of the universe, kind of like a truly UNIVERSAL iPad.  The vacuum cleaner turns out to be a weapon made of metallicam, the heaviest known metal in the galaxy, that Paulie has plans to set off.  Just to spice things up a bit, Nick’s boss, Judy (nicknamed Cruella) is breathing down his neck, as he tries to make partner in the firm.  So will Nick save the universe? Get the girl?  Make Partner?  Live to see another day?

There are so many awesome one liners and fantastic characters in this story that will instantly be submersed and won’t come up until you are finished.  I don’t think I have read a book this outlandish and with pitch perfect humor since I read The Hitchhikers Guide to the Galaxy.  It has enough snarky dialogue to keep me happy forever.  Even though there is a lot going on in this book, each part makes up an awesome universe of wit and wisdom all while making fun of the music industry and lawyers, and well, parrots too!  When I first read the description of this book, I knew it was for me.  When I described this book to others, they demanded that I give it to them right then.  So I guess I know what everyone is getting this holiday season.
GET YOUR KINDLE COPY FOR
ONLY 99 CENTS RIGHT NOW!

Ends 10/13/13
US only, no PO Boxes
Open only to those who can legally enter
Winning Entry will be verified prior to prize being awarded. No purchase necessary.
You must be 18 or older to enter .
The winner will be chosen by rafflecopter and announced here as well as emailed and will have 48 hours to respond or a new winner will be chosen.
This giveaway is in no way associated with Facebook, Twitter, Rafflecopter or any other entity unless otherwise specified.
The number of eligible entries received determines the odds of winning.
Giveaway was organized by BookHounds and sponsored by the publisher