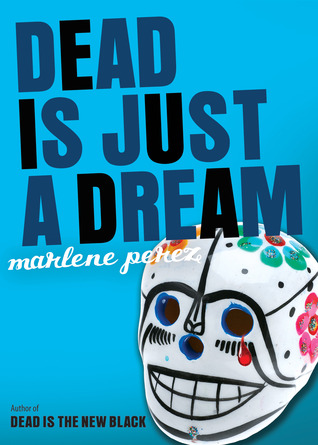 The people of Nightshade, California, are dying in their sleep, and fifteen-year-old warrior Jessica Walsh is determined to find the killer . . . or killers. Justice isn’t the only thing on Jessica’s mind, however. In fact, some days she’s not sure which is worse—having a creepy clown lurking outside her window or having her rock star boyfriend’s hot ex-girlfriend back in town. Nightshade is crawling with paranormal people like Jessica . . . and it’s possible that the anti-paranormal group the Scourge is back to get rid of them. Or are the disturbing works of a strange painter somehow at the heart of the mystery? Jessica is losing sleep—but she’s got to figure it out before the night terrors strike again.

Marlene Perez is the author of eight books in the Dead Is Series, including Dead Is The New Black, an ALA Quick Pick for Reluctant Young Adult Readers. She lives in Orange County, California. Visit her website at.marleneperez.com.

Jessica is starting to get the hang of being a virago and things have been quiet in the town of Nightshade.  Her relationship with Dom, the lead singer in Side Effects May Vary is going well, that is until his ex shows up at the invitation of his mother.  With nothing to do one night, Jessica and her friends head off to a local art exhibit where the painting look like your worst dreams. After the show, they hang out at the beach where they see a strange ghostly horse and coincidentally, Jessica and two of her sisters are signed up for horse riding lessons at a new farm.

At the farm, Jessica sees a ghostly girl named Sanja, who confesses she is a Mara, a person who can cause nightmares and also the horse they saw at the beach. Soon after a murder is reported quickly followed by her brother’s girlfriend going into a coma.  When another murder occurs, Jessica starts putting clues together that point to the murderer.  Daisy makes a wonderful appearance, helping Jessica solve the crimes with her psychic abilities.

This is a wonderful installment to the Dead Is series and I love how Jessica is learning to trust herself and her abilities more.  She is growing from an insecure freshman to a more secure person.  I love recommending this series since even the most reluctant reader can easily pick up on the characters and plot.  Parents:  this one is super safe, just some kissing and bit of alluded to violence.