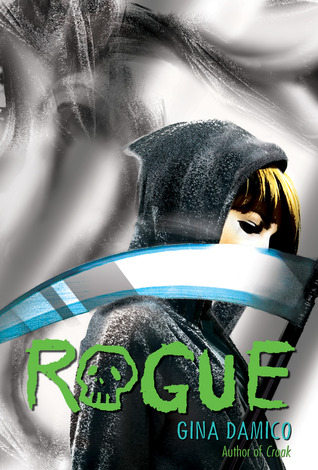 Lex, a teenage Grim Reaper, has the power to Damn souls, and it’s getting out of control. Her boyfriend, Driggs, is dead . . . sort of. She’s a fugitive, on the run from the maniacal new mayor of Croak and the townspeople who want to see her pay the price for her misdeeds. Uncle Mort rounds up the Junior Grims to flee Croak once again, but this time they’re joined by Grotton, the most powerful Grim of all time. Their new mission is clear: Fix his mistakes, or the Afterlife will cease to exist, along with all the souls in it.

The gang heads for Necropolis, the labyrinth-like capital city of the Grimsphere. There, they discover that the Grimsphere needs a reboot. To do that, the portals to the Afterlife must be destroyed . . . but even that may not be enough to fix the damage. Things go from bad to worse, and when at last the fate of the Afterlife and all the souls of the Damned hang in the balance, it falls to Lex and her friends to make one final, impossible choice.

Gina Damico is the author of Croak, Scorch, and Rogue. She received a degree in theater and sociology from Boston College, where she was active with the Committee for Creative Enactments, the country’s only collegiate murder mystery improv comedy troupe. She has since worked as a tour guide, transcriptionist, theater house manager, scenic artist, and movie extra. She lives outside of Boston with her husband, two cats, and a closet full of black hoodies. Visit her website at www.ginadami.co.

SOURCE:  AMAZON VINE
MY THOUGHTS
ABSOLUTELY LOVED IT
*** spoilers if you haven’t read the first two in the series ***
And why haven’t you read these awesome books yet?
Lex is quickly learning that she has skills above and beyond the ability to Damn and none of them are supernatural.  With Driggs being somewhere between ghost and dead-dead, she can still see him and hold him once in awhile.  As the Grimsphere is starting to collapse and might signal the end of the afterlife, Lex and her uncle Mort must contain the damage and prevent the downfall.  Armed with the Wrong Book and which is attached to the Grim Creator, Grotton, the Juniors must follow the clues to save everything for the afterlife.  Can they do it in time?

Of course, the Junior have many tricks up their sleeves, including fast thinking and Uncle Mort’s theories.  They head to Necropolis, to seal the last opening to the Grimsphere where Norwood, has already somewhat taken over.  This is such a thrilling conclusion that left me feeling a bit bittersweet.  I was so sad that Driggs was no longer corporeal but could be when he touched Lex.  I am going to miss the dry sense of humor and swift comebacks of Lex and Uncle Mort.

These characters aren’t perfect, they make a lot of mistakes and some die.  The romance between Driggs and Lex is just swoon-worthy.  These two are meant for each other even if they can’t always be together.  A little more about Driggs’ history is also explained and it is pretty sad.    Do yourself a favor and go grab all three books to read before summer ends.  You won’t be disappointed.  Sigh, I have to get over the end of this series.  I am going to miss Lex so much.

Disclosure
I received this book from the publisher at no charge and in no way influenced my review. If you are considering purchasing this book or anything else from Amazon, please use my link above since I earn a very small percentage of the sale which helps pay for shipping my giveaways!