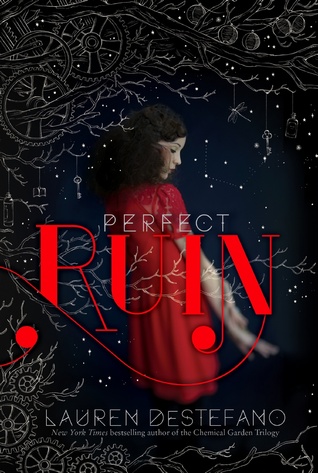 On Internment, the floating island in the clouds where 16-year-old Morgan Stockhour lives, getting too close to the edge can lead to madness. Even though Morgan’s older brother, Lex, was a Jumper, Morgan vows never to end up like him. She tries her best not to mind that her life is orderly and boring, and if she ever wonders about the ground, and why it is forbidden, she takes solace in best friend Pen and her betrothed, Basil.

Then a murder, the first in a generation, rocks the city. With whispers swirling and fear on the wind, Morgan can no longer stop herself from investigating, especially when she meets Judas. He is the boy being blamed for the murder — betrothed to the victim — but Morgan is convinced of his innocence. Secrets lay at the heart of Internment, but nothing can prepare Morgan for what she will find — or who she will lose.

About the Author
Lauren DeStefano is the author of The Internment Chronicles and the New York Times bestselling Chemical Garden trilogy, which includes Wither, Fever, and Sever. She earned her BA in English with a concentration in creative writing from Albertus Magnus College in Connecticut. Visit her at LaurenDeStefano.com.

My Thoughts
Loved it

Morgan lives above the earth on a floating island of land that was some how torn off and flung into space. This story is full of intrigue and mystery all built on a world similar to ours, but with striking differences. Things are very controlled on this sky island, everything to when you can have children to who that child will marry and if something happens to your mate, you are destined to be alone the rest of your life.  The only real element of freedom is choosing how you earn a living.

A murder has recently occurred and the whole country is on lock down and the small amount of freedom the citizens have is restricted.  Morgan is intrigued and when she randomly meets the boy accused of the murder, she can’t help  wonder if he really did it.  Especially when the murdered girl’s sister plasters the revolutionary paper around the school.  Morgan’s brother, Lex,  is a “jumper” one who has tried to fling himself off the side of the island but does not succeed. He is pretty damaged and now blind.  There is a group of revolutionaries that oppose the government’s control and are trying to get off the island. Something that has been tried for generations.

I really enjoyed this first installment of DeStefano’s new trilogy and she builds in all of the societal issues that she used in the Chemical Garden but with a bit of Across the Universe worked in.  In some ways, this is a bit darker than that series.  It has a wonderful ending that will leave you hanging a bit.  Parents:  some language, forced drug use, and sexual situations.