“Matilda and HELP FOR THE HAUNTED are each stories about a young girl who loves books, is smart beyond her years, and must rely on her intelligence and curiosity in order to set things right in her world.”–John Searles 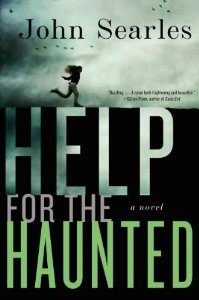 TWO SISTERS. ONE DARK SECRET.
·         Fifteen-year-old Sylvie Mason isn’t sure who murdered her parents that winter night, but she knows she can’t stop looking until she knows the truth. Sylvie pursues the mystery, moving closer to the knowledge of what occurred that night, as she comes to terms with her family’s past and uncovers secrets that have haunted them for years
·         Rose, Sylvie’s sister, seems to have a secret of her own – did she murder her own parents?
·         A frightening and mysterious ghost story that you won’t be able to put down until you’re done
·         Recently received a starred Booklist review, a starred Publishers Weekly review, and Gillian Flynn (author of Gone Girl) loved it: “Part ghost story, part coming-of-age story, John Searles’ ‘HELP FOR THE HAUNTED’ is a dazzling, dark portrait of a troubled family beset by the supernatural…The result is a novel both frightening and beautiful.”
About The Author

John Searles is the author of the best-selling novels Boy Still Missing and Strange But True. John appears regularly as a book critic on NBC’s Today Show. He has also appeared on CBS’s The Early Show, Live! with Regis & Kelly and CNN to discuss his favorite book selections. He is is the Editor-at-Large of Cosmopolitan. His essays have been appeared in the New York Times, the Washington Post, the Daily Beast and other national publications. He lives in New York City and can be found on twitter @searlesbooks.

Check back here for a giveaway of the book closer to the release date!