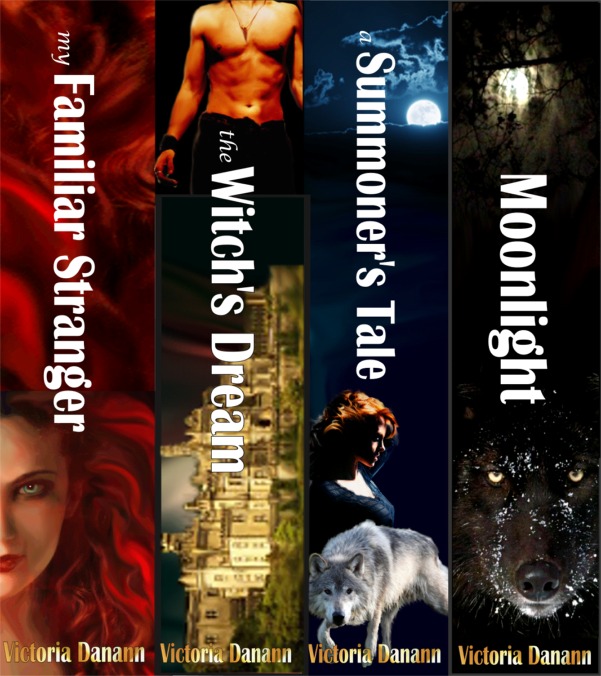 Once upon a time a girl traveled so far from home that she found herself in another world where heroes, elves, vampires, werewolves, witches, demons, fae, berserkers, and psychics became her friends and family. As an accidental pilgrim, a stranger in a “strangish: land, she learned that there’s a place where adventure intersects fairytales and that true love can find you in the strangest places, when you’re least expecting it, even when you’re far, far from home.

DESCRIPTION. Minutes ahead of inevitable assassination, Elora Laiken is forcibly transported to an alternate dimension similar, but not identical, to her own. She is stranded. Alone. Far from home. An alien amid the modern day knights of a secret society of vampire hunters and paranormal investigators.

Of course a girl could suffer worse problems than having gorgeous suitors. Perhaps more importantly, in the midst of an epidemic of vampire related abductions, can she stay alive long enough to choose between an honor debt, true love, or the breathlessness of single-minded passion?

2. The Witch’s Dream: A Love Letter to Paranormal Romance

DESCRIPTION: Quintessential Black Swan knight, Engel Storm, was left behind when Elora Laiken chose his best friend. Now his heart is bruised and battered and he’s had it with love. But a transplanted witch who happens to be the world’s best tracker plans to do everything in her considerable power to change his mind.

The Witch’s Dream begins with B Team on temporary assignment to Black Swan headquarters in Edinburgh where they are supposed to fill in for stretched-thin resources and assist with a werewolf issue. They’ve been given permission to stop on the way to celebrate a special handfasting in an Irish castle.

When they reach Edinburgh, the afterglow of an elftale wedding quickly becomes all business. A missing person report turns into a demon abduction. A simple werewolf sanction becomes a diplomatic issue requiring the one thing Elora is no longer willing to give – finesse.

3. A Summoner’s Tale: The Vampire’s Confessor

DESCRIPTION: A secret society, a witch, a psychic, vampires, modern day knights, heroes, elves, fae, assassins from another dimension, and fairytales come together where emotions intersect. Two souls, joined by a mystical bond, separated by distance, struggle through pain and darkness simultaneously. Each alone must traverse an ultimate confrontation with character and the will to survive. Ex-vampire, Istvan Baka, and his first victim prove that true love can wait patiently through lifetimes for a second chance. Even in the strangest places. Even when you’re least expecting it. Even when you’re far, far from home.

The original release of My Familiar Stranger had song lyrics at the beginning of every chapter. They were removed for legal reasons, but the sentiment behind the songs still permeates each page.
If you’ve run across my bio, you know I’m also a musician. Because I can so easily get drawn into music and be distracted with such things as breaking down its parts or thinking how I would have done the arrangement differently, I don’t listen while writing. Ever. But, that doesn’t mean that music doesn’t serve my writing as both inspiration and influence. Or that I don’t hear it in my head when writing.
The songs I’m listing in this post are songs that are either mentioned in the books or inspired parts of the books.

My good friend Alicia (Lovely) Brass, one of the lead singers with The Next Level Band, sings the soundtrack for the video. I think of this as Ram’s perspective in song. He didn’t know how long he’d been wishing for his mate until she showed up holding his best friend’s hand.

This song is mentioned in the book. It’s a joke between Elora Laiken and Istvan Baka, but it’s also darkly serious. I really think of this as Baka’s song. I’m including the lyrics because I was hearing this song in my head over and over when I wrote the following scene. The pull that he feels toward Elora is desperate. He isn’t just looking for a good time. He has to be close to her.

What kind of love have you got?
You should be home but you’re not.
A room full of noise and dangerous boys
still makes you thirsty and hot.

I was hearing this song when I was writing the scenes in Notte Fuoco. Elora was in mid-dilemma. Three dangerous boys believed they were in love with her and any one of them would make any woman thirsty and hot.

4. “Face in the Mirror” – Thunderstone

There’s a face in the mirror, the eyes of a stranger.
You can burn yourself if you fly too close to the sun that shines so bright.
You can turn away or decide to stay where the darkness takes over the light.
We are weakened by the virus and there’s nothing we can feel.
If this will be our last song, I welcome you to the real.
So this is the way we live. These are the hands that give.
There’s a face in the mirror and mirror never lies.

These lyrics went with the chapter when Ram woke up in the same hospital room as Elora to find that she had been infected by the vampire virus.

Baby,
it’s all I know,
that you’re half of the flesh
and blood makes me whole.

These lyrics went at the beginning of Chapter 21, when Ram had retreated to his boyhood sanctuary in the New Forest preserve in northern Ireland, thinking he had lost his mate forever, to his closest friend.

There are three songs that figured prominently into the writing of this book which drew heavily on an eighties theme.

2. “Never Gonna Give You Up” Two versions: Original – Rick Astley. Acoustic by Derik Nelson for The Witch’s Dream.

Of course, as you all know, there is one song that figures prominently into the storyline. I would have loved to include most of the lyrics in Kay’s and Katrina’s wedding ceremony, but reaching three composers and trying to negotiate separate deals turned into a bigger “deal” than I could have imagined. Nonetheless, I referenced the song and hoped that people who weren’t familiar would look it up. It is, without a doubt, THE quintessential disco song of the era. It also has the most romantic lyrics of all time.
My promise to deliver Ram’s acoustic version in the video has brought lots of readers to hear Derik Nelson’s arrangement which, as Ram would say, is bloomin’ perfection.

Victoria’a FAVORITE fan comment ever! Grabbed as a Goodreads quote… “I’ve been Rick Rolled by my book!” What? You don’t know what it means to be Rick Rolled? Watch this. http://www.youtube.com/watch?v=H52TTCoS7To

Because Deliverance’s demon is tongue-in-cheek. In Moonlight, he actually programs this song as a ring tone into Litha’s phone without her permission.

This is the song that provides the music for the book video. It is, in my opinion, THE great Classic Rock masterpiece of the era. It dovetailed into what I was writing about so beautifully that it almost seemed like the song and the book were conceived as a pair. I looked up the song because the phrase that I kept hearing in my head over and over again, when Elora and Baka were simultaneously alone and in agony, was “Still of the Night”.
My band has covered everything from Led Zeppelin to Styx, note for note, but even we won’t attempt this music.

Mentioned near the end of the book, when Baka inadvertently leads the rescue team to his location by singing this song loudly. It’s a nonsense song from 1944, but, at six-hundred-years-old, that would practically make it a current hit to him. I include this for the 99% of readers who may never have even heard of this song.

Obviously, this is Grey’s song. The fact that he’s a fool for Luna doesn’t make him any less dangerous. In fact, being cast into the uncertainty of love be conquered probably makes him more predatory. If you are a reader who gets caught up in a story, you probably don’t think about the fairytale parallels being subtly woven into the story, but it is there nonetheless.