Welcome to Goodbye For Now
Writing Tip Blog Tour!
Glad to have you along.

Today I’m going to offer a piece of advice and an example, but I’m immediately going to walk it back as well. That’s pretty much what my life is like if you want the honest truth. I see both sides of everything always. It makes it very hard to make decisions. Fortunately, writing lends itself to this sort of personality and life approach. There are few hard and fast rules. There’s a lot to be said for being able to see the other side. And the one after that. And the one after that.
Interviewing your own characters can work beautifully to help you get to know them better. The more real, the more well-rounded, the more full, the more human they are to you, the better job you’ll do of writing them that way, and the better characters — and better book — you’ll have as a result. I read widely, and I love a wide variety of books that often have very little in common except — always — this: they have great characters. I can’t think of any books I love that don’t have good characters. Character is all.
So for instance, Goodbye For Now’s main characters are Sam and Meredith. They are partners in the romantic sense. And they are also partners in the business sense. Early on in Goodbye For Now, they open up a business together called RePose to allow users to email and video chat with their dead loved ones. This creates a predictable stir. People love it. But people — especially the media — also have grave (and legitimate) concerns. Quickly, Sam and Meredith are inundated with interview requests from newspapers, television, and magazines. Some appear in the book. Others don’t. But writing them up was still a useful exercise. Here’s a transcript, if you will, from NPR’s never-aired interview with Sam and Meredith:
NPR: Welcome Sam Elling and Meredith Maxwell, creators of the revolutionary new technology RePose. Thank you for joining us.
Meredith: Thank you for having us. We’re delighted to be here.
NPR: As we heard in the introduction, RePose allows users to email, use Facebook or text message or Twitter, and even video chat with their dead loved ones. That’s extraordinary.
Meredith: It is extraordinary. Sam’s background as a software engineer — and his status as a genius [laughter] — allowed him to invent a way to analyze someone’s archived electronic output and then create a projection of that person.
NPR: You read old emails and Facebook posts, a person’s Twitter feeds, saved Skype chats, and are able to recreate the person who made them.
Meredith: That’s exactly right. Because we, all of us, produce so much electronic output every day when we use social media or interact online, there’s a lot to go on in order to convincingly recreate us after we can longer do so ourselves.
NPR: So convincingly that the living user cannot tell the difference?
Meredith: Well not quite. It’s a bit more complicated than that. You can’t take your projection in death places it never went in life. You can’t ask it how it liked a new movie that’s out because it won’t have seen it so it won’t have any archived material on that subject. But Sam’s programming does a remarkable job of guessing what your dead loved one would say in an increasingly wide range of situations. It can go places you never imagined. We know a lot about what people will do or say next based on what they did or said before. It works astonishingly well.
NPR: In fact, some people are saying it works too well. You’ve gotten a lot of heat from groups and organizations concerned that you’re somehow tricking users into thinking you’ve resurrected the dead. They think they’re talking to ghosts when it’s really just a computer trick.
Meredith: We have in fact gotten a lot of those concerns, and we understand and appreciate them. We now do a tutorial before new users get started to make sure they understand both the possibilities and the limitations of RePose. We aren’t performing seances. We think our service is in fact quite a bit more honest and more valuable than that.
NPR: You’ve also heard a lot of concern that this technology isn’t helping people mourn but rather hindering their grieving process by drawing it out, by making it seem as if their loved ones haven’t passed when in fact they have.
Meredith: Well as you know, Sam invented this for me. When my grandmother died, I was desperate to retain at least something of her. At first, I was alarmed at finding email from her in my inbox, but now that I’ve gotten used to the idea, it’s helped me immensely. She was one of the most important people in my life. Strange as it sounds, I needed her to help me get over her loss. That’s what RePose allows me to do.
Etcetera. This goes on for a while. It never made the book, but that doesn’t mean writing it wasn’t useful. Notice that Sam doesn’t say a word. He’s the kind of guy who’d remain absolutely silent during a radio interview. This wasn’t something I realized until I actually tried it.
All of that said, a word of warning: be wary of knowing too much about your characters that can’t possibly go into the book. In your head, they may be fully fleshed out, wonderfully developed, quirky and interesting people, but unless they are that way on the page as well, it does you no good. So sometimes I won’t let myself do exercises like this one. I allow myself nothing that I can’t communicate to my reader. And that’s a useful exercise as well. 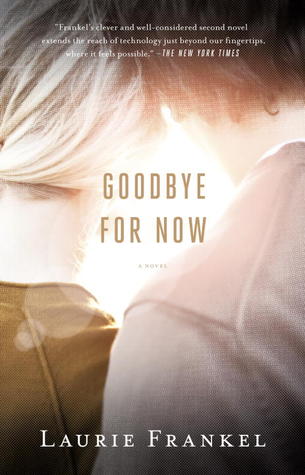 Release date: May 7, 2013
When Sam Elling creates an algorithm to pair people with their soul mates online, he meets Meredith, his own perfect match. But when Meredith’s grandmother Livvie dies unexpectedly, Sam puts his algorithm to even better use: it compiles Livvie’s old emails and video chats to create a computer simulation so that Meredith can say goodbye. It’s not supernatural; it’s computer science, and Meredith loves it—too much to keep to herself.

Together, she and Sam open RePose to help others who have lost a loved one. Business takes off, but for every person who just wants to say goodbye, there’s someone else who can’t let go. This twenty-first-century love story asks what would happen if saying goodbye were just the beginning, and shows how love can take on a life of its own.

You can read my review HERE 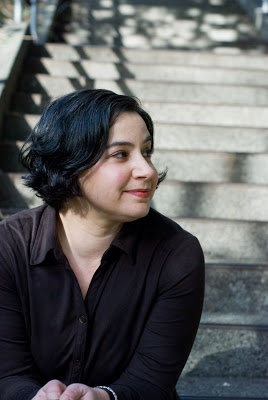 Laurie Frankel will be doing a Q&A on Goodreads from August 7-28th
Everyone is welcome!
She is the author of two novels, GOODBYE FOR NOW and THE ATLAS OF LOVE. She lives with her husband, son, and border collie in Seattle, but she’s originally from Maryland. She is also a baseball fan, a soup maker, a theater lover, a yoga practicer, a comma expert, and a huge reader. Plus, she loves book clubs, so if you’d like her to visit or chat with yours, just shoot her an email.

Win 1 of 24 copies
US only – no PO Boxes
Void where prohibited
Sponsored by the author
Ends 8.21