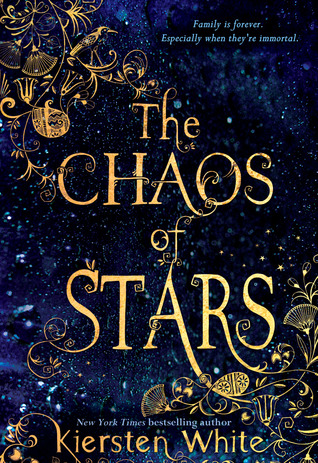 Kiersten White, New York Times bestselling author of Paranormalcy, is back with The Chaos of Stars—an enchanting novel set in Egypt and San Diego that captures the magic of first love and the eternally complicated truth about family.

Isadora’s family is seriously screwed up—which comes with the territory when you’re the human daughter of the ancient Egyptian gods Isis and Osiris. Isadora is tired of living with crazy relatives who think she’s only worthy of a passing glance—so when she gets the chance to move to California with her brother, she jumps on it. But her new life comes with plenty of its own dramatic—and dangerous—complications . . . and Isadora quickly learns there’s no such thing as a clean break from family.

Blending Ally Carter’s humor and the romance of Cynthia Hand’s Unearthly, The Chaos of Stars takes readers on an unforgettable journey halfway across the world and back, and proves there’s no place like home.

From the Back Cover

Isadora’s family is seriously screwed up.

Of course, when you’re the human daughter of Egyptian gods, that comes with the territory.

Isadora’s sick of living a life where she’s only worthy of a passing glance, and when she’s offered the chance to move thousands of miles away, she jumps on it. But as much as Isadora tries to keep her new world and old world apart, she quickly realizes there’s no such thing as a clean break when it comes to family.

Kiersten White is the New York Times bestselling author of the Paranormalcy trilogy, as well as the psychological thriller Mind Games. She has one tall husband and two small children, and lives near the ocean in San Diego, California, where her days are perfectly normal. This abundance of normal led her to a fascination with all things paranormal, including but not limited to faeries, vampires, and pop culture.

SOURCE:  AROUND THE WORLD ARC TOURS
MY THOUGHTS
ABSOLUTELY LOVED IT
So what do you do when your mother, Isis  is THE goddess of life and your father, Osiris, is THE god of death?  As a sixteen year old, Isadora wants nothing more than for her parents that she literally worships, to pay attention to her.  She also has epic family issues that make a soap opera look like child’s play.  Her aunt slept with her father and she has a half-brother, Anubis,  who is all evil from that union.  Her oldest brother is married to a drunken slut.  Oh, and her mother has tried to kill the sun god, father of them all and has somewhat succeeded.  When Isadora discovers that the room she has been decorating is actually her tomb, she freaks and has a major melt down when she realizes she is not immortal like her parents.  Added to this, she has been having horrible dreams and her mother is also having them.

When her mother decides that she must go away, Isadora gets her unspoken wish and she is sent to her closest brother, Sirius, in San Diego.  Her mother has also arranged a job for her at the local museum to display some of her mother’s things, that Isadora describes as cast-offs, but in reality are priceless artifacts.  There she meets Tyler, a girl who turns out to be something she never thought she would ever have: a BFF.  Yes, Isadora is up on all the latest trends but has never experiences any of them in person.  She also meets a sullen poet, Ry, short for Orion, the constellation she was born under.  Ry quickly becomes the focus of all of her thoughts but since she feels that nothing is permanent, why should she ever fall in love?  Even if the boy is handsome as a Greek god and makes her melt inside?

This is such a wonderful retelling of Egyptian mythology mixed with a bit of Greek.  There is such a humorous undertone to White’s writing that I just adore.   Even though the background of the story revolves around ancient myths this is really a contemporary romance.  There is also a mystery going on around Isadora and her family’s power struggles.  This just has the right balance of both to keep your interest and make this a super fast read.  Parents:  this is really acceptable for even pre-teens since there is no language issues, only a few kisses and a few instances of violence, which is less that what is on cartoons these days.