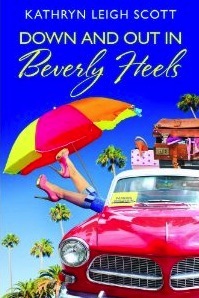 From brunch in Bel Air to homeless in Hollywood…

Former actress Meg Barnes used to have it all: tony Beverly Hills address, Amex Black card, Manolos for every day of the month. Not to mention a career as a popular TV detective that made her glittering life possible. But her lifestyle of the rich and famous has turned into a reality show for d-listed starlets. Lost in her Louboutins, she has one man to thank: her con man of a husband.

Handsome FBI agent Jack Mitchell knows a suspect when he sees one—even if she’s as beautiful and gutsy as Meg. Meg’s ex “made off” with half of Hollywood’s wealth in an epic real estate scam. And Jack thinks Meg may have been involved.

Determined to prove her innocence Meg teams up with her quirky, movie-mad best friend to track down her fugitive husband and exact justice. But getting her life, and her career, back on track is harder than auditioning for Spielberg. Especially when her life is threatened. Meg has to trust Jack, the man who may want her behind bars…or as his leading lady for life. 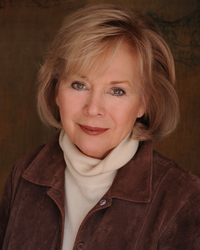 About the Author
Kathryn Leigh Scott starred as the doomed fiancée of vampire Barnabas Collins in the original Gothic daytime drama series Dark Shadows, and in the 1971 film House of Dark Shadows. She also appears in a cameo role in Dark Shadows, starring Johnny Depp as Barnabas Collis, directed by Tim Burton. She is the author of several books about the series, including Dark Shadows Memories. Katherine is a graduate of the American Academy of Dramatic Arts and launched Pomegranate Press, which publishes books about the entertainment industry. She is the author of The Bunny Years: The Surprising Inside Story of the Playboy Clubs: The Women Who Worked as Bunnies, and Where They Are Now. Katherine lives in Los Angeles, California.

Heide, the enchanting story about the Swiss orphan girl and her grandfather. I adored my grandfather and read the book over and over. I also loved fairy tales . . . and when I was in Second grade, I was introduced to the Betsy, Tacy and Tib books by Maude Hart Lovelace. I don’t know that the series is popular anymore, but these stories about three girls growing up in the early years of the 20th Century were so inspiring to me. Betsy became a journalist and that’s what I set as my own goal.

I have three books on my bedside table that I have read: “Paris: The Novel” by Edward Rutherford. “I’ll Be Seeing you” by Suzanne Hayes and Loretta Nyhan. The Glass Castle by Jeanette Walls

Thank you for asking! I’m a farmer’s daughter and couldn’t live without digging my hands in soil. I love to arrange flowers for the house, so I always manage to have something in bloom: roses, hydrangea, freesia, various lilies, daisies, iris, gardenias, gladiolas, etc. Today, I have a bowl of colorful nasturtiums on my desk. I have the most amazing brilliant red amaryllis that blooms every year. I also have a lemon and apricot trees. Unfortunately, the climate in Southern California isn’t suitable for lilac, peonies or rhododendron, but I shouldn’t complain when I can grow an abundance of other flowers throughout the year.

The spelling for “rhododendron.” Before that, I was working on the last chapter of the sequel to “Down and Out in Beverly Heels” and needed to know how the mechanism works on a magician’s collapsible top hat . . . is there anything you can’t find on Google?

Raunchy language will do it… and bullying behavior.

Kathryn Leigh Scott, author of Down and Out in Beverly Heels, is probably best known for her star turn as Josette Du Pres, ingénue bride of reluctant vampire Barnabas Collins in the TV cult classic “Dark Shadows.” This is her second work of fiction, following her debut novel last year, Dark Passages. While continuing her acting career, Kathryn launched Pomegranate Press to publish books about the entertainment industry, “Dark Shadows” fan books, and other nonfiction and fiction titles.

Want to win this NEW book?
Contest is open to anyone over 18 years old with a US or Canadian mailing address. Your choice of print or ebook.  International winner will receive an ebook. (sorry, No po boxes)

Contest ends on 6.29.13 Winner will be chosen by Random.org

WINNER WILL BE ANNOUNCED IN THE COMMENTS OF THIS POST
Winner will have 48 hours to respond to email or a new winner will be chosen.
Duplicate entries will be deleted.  Void where prohibited.
This giveaway is sponsored by the author and ONE book is available.