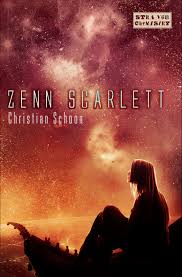 Zenn Scarlett is a bright, determined, occasionally a-little-too-smart-for-her-own-good 17-year-old girl training hard to become an exoveterinarian. That means she’s specializing in the treatment of exotic alien life forms, mostly large and generally dangerous. Her novice year of training at the Ciscan Cloister Exovet Clinic on Mars will find her working with alien patients from whalehounds the size of a hay barn to a baby Kiran Sunkiller, a colossal floating creature that will grow up to carry a whole sky-city on its back.
But after a series of inexplicable animal escapes from the school and other near-disasters, the Cloister is in real danger of being shut down by a group of alien-hating officials. If that happens, Zenn knows only too well the grim fate awaiting the creatures she loves.
Now, she must unravel the baffling events plaguing her school, before someone is hurt or killed, before everything she cares about is ripped away from her and her family forever. To solve this mystery – and live to tell about it – Zenn will have to put her new exovet skills to work in ways she never imagined, and in the process learn just how powerful compassion and empathy can be.

Welcome to Mars!  Somewhere in the future, we meet Zenn in the opening act where her mother disappears along with Indra (snake-like creature with immense natural powers of energy) and the world quickly builds from there.  Through Zenn we are introduced to a host of strange animals that populate this world as she trains to be an exovet like her family.  As she trains, strange things start to happen to her, she connects with the animals, in fact so much, she can feel their disease.  Back in the Ciscan Cloister Exovet Clinic, a sort of monastery city, she meets Liam, a new student,  and she doesn’t even register that he is attracted to her.  She has very little filter between her mouth and her brain and this leads to trouble at times.

Of course, there must be a bit of a mystery to keep the plot going so Zenn tries to discover why her father seems to ignore her most of the time, leaving her training to her uncle as she progress to her being fully invested as an exovet.   There are increasing threats to her society as robbers ply their trade and the citizen are about to give up on their city.  Since this is the initial book in the series, there is a lot of world building necessary to plot the upcoming installments and are a bit slow in places.  Overall, this is a great start to a new Sci-Fi series, something I haven’t seen in a long time.

About the AuthorChristian Schoon grew up in Minnesota, and worked his way through college in a succession of rock bands before earning his degree from the U of Nebraska-Lincoln School of Journalism. Following a stint as an in-house copywriter/scriptwriter at Walt Disney Studios in Burbank, he supplied freelance copy for the entertainment industry and scriptwriting for live-action and animated TV. Currently, he writes from his 150-year-old farmstead in Iowa which he shares with a fluctuating number of horses (generally less than a dozen, but not always), 30 or so cats, a dog, three ferrets and a surprisingly tolerant wife. The Zenn Scarlett books are his first novels, however he admits to being an unrepentant fan of science fiction and fantasy ever since discovering the tales of Edgar Rice Burroughs in the fifth grade. He can be found at his blog: christianschoon.com

Twitter * Goodreads * Blog * Facebook  * Publisher Page
PLEASE WELCOME CHRISTIAN TO BOOKHOUNDS
1. What is the first book you remember reading by yourself as a child?

Well, memory, as research has shown pretty unequivocally lately, turns out to be the very essence of an unreliable narrator; a messy little serpent’s-nest of neurons who have a way of re-routing themselves when you’re not paying attention. But, my current memory-config tells me one of the earliest books I read was Beautiful Joe by Saunders. It’s a tough read, emotionally, for a youngish kid – Joe lives a true dog’s life, especially at first. But the story is just so unforgettable and humane (as opposed to human). A real classic and a heart-breaker and a life-affirmer.

I’ve just started in on my copy of Playing Tyler by fellow Strange Chemistry author T.L. Costa; it jumps off to a brilliant beginning. She has SO captured the teen-boy voice. I’m hooked. It’s gonna be quite a ride, I can already tell!

Is this a tricksie question? Hmmm… my garden is the sort that receives the bare minimum of tending so it grows tangled and briary-fruitish-vegetable-y-leafy and amusingly-mutated but not so thorny-dystopic-pointy-rooted you can’t walk around barefoot.

The name of the author of Beautiful Joe (*looks sheepish* Yes, I’m fessing up here; I read it back in grade school, but I should still have remembered the author’s name. My apologies.)

Seeing any life form – human, non-human, imaginary, alien – in pain. I seem to have a really visceral reaction to this sort of thing. Of course, after the brief cringing, I’ll try to do whatever’s in my meager capability-range and skill-set to remedy the situation.

Want to win a copy of this book?
Go to my YA blog HERE

Spotlight: The Fragile Ones by Jennifer Chase @jc