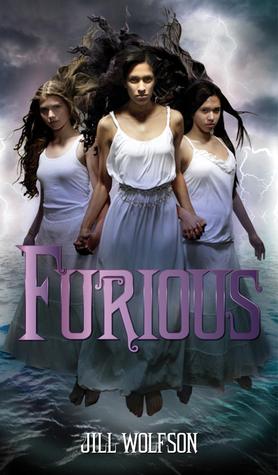 We were only three angry high school girls, to begin with. Alix, the hot-tempered surfer chick; Stephanie, the tree-hugging activist; and me, Meg, the quiet foster kid, the one who never quite fit in. We hardly knew each other, but each of us nurtured a burning anger: at the jerks in our class, at our disappointing parents, at the whole flawed, unjust world.

We were only three angry girls, simmering uselessly in our ocean-side California town, until one day a mysterious, beautiful classmate named Ambrosia taught us what else we could be: Powerful. Deadly. Furious.

Yes, that’s us. The three Greek Furies, come to life, ready to take our revenge on everyone who deserves it. And who doesn’t deserve it, really? We’re done with chances. We are angry. The Furies have come to town.

Jill Wolfson has worked as a journalist for newspapers and magazines around the country. Her award-winning novels for young people include What I Call Life; Home, and Other Big, Fat Lies; and Cold Hands, Warm Heart. Jill has taught writing at several universities and is a long-time volunteer in a writing program for incarcerated teenagers. She lives by the ocean in Santa Cruz, California.

How many times have you wanted to just get revenge and take out your fury at the injustices you have suffered quietly?  Well, these three young teens go for it even though they find there are consequences to your actions. Meg, quietly stoic, is a foster child. living with daily abuse from her guardian, who refuses to feed or clothe her properly even though the state pays her.  Stephanie, an outspoken activist,  who weeps for the earth and all of the damage that is being done to it.  Alix is an anger surfer girl, outraged by the bullies that abound in the sea.  Together they channel their anger and seek revenge on those who have wronged them and others.

This is a smart and updated version of the Greek Furies mythology of three females who were put on earth to avenge the weak and those causing evil.  These girls are a modern spin with each one tackling current issues of ecology, bullies, and the poor.  I really enjoyed the connection these girls had together and how that bond made them stronger.  Although they soon realized that the power could be used for evil as well.  The characters are all nicely developed and I would really like to read more about them.