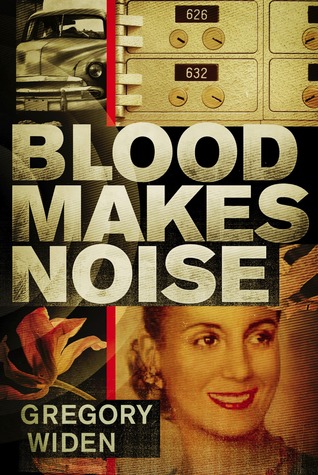 On a summer’s night in 1955, CIA agent Michael Suslov is summoned to a secret vault in the heart of Buenos Aires. His mission: transport the corpse of Eva Peron to a new hiding place in the wake of her husband’s fall from power. But before Michael can comply, everything goes tragically, horribly wrong…
Sixteen years later, Michael Suslov is a ghost of a man, an ex-government agent living off the radar—and the only soul alive who knows where Evita is buried. When an old friend from Argentine Military Intelligence appeals to him for help bringing the body home, Michael agrees, hoping this final mission will quiet the demons from his past. But he’s not the only one on a recovery mission: two rogue CIA agents are tracking him, desperate to unearth Evita before Michael does—and to claim the secret millions they believe she took to her grave.
Based on a little-known yet fascinating true story, Blood Makes Noise is a brilliant examination of the power of the dead over the lives of the living.

A native of Laguna Beach, California, Gregory Widen is a former firefighter, NPR station host, and mountain-rescue team member. While a film student at UCLA, he penned the script for what would become the movie Highlander, starring Sean Connery. Among his other screenplays are Backdraft and The Prophecy, and his television writing includes scripts for Tales from the Crypt and Rescue 77. A committed traveler, his explorations have taken him to war-torn Somalia, Uzbekistan, Namibia, the summit of Mount Kilimanjaro, the arctic island of Svalbard, Indonesia, and Argentina. He lives in Los Angeles, where he is at work on a film for Universal Pictures.

PLEASE WELCOME GREGORY TO BOOKHOUNDS!
1. What is the first book you remember reading by yourself as a child?

Mostly trees, over 30 I planted, at my house here in LA. Though I have a  small herb garden. I find trees seem to like me more.

People who speak baby-talk to adults, the idea of knee injuries, the  terrifying overuse of the word “gratitude” as a single-word statement, my  dog running in front of cars on a daily basis, bad breaker panel wiring (I’m an ex fireman), the way the word “irony” has become, in normal usage, synonymous with “coincidence”.

WANT TO WIN A Copy OF THIS BOOK?
Complete the below form
Contest is open to anyone over 18 years old. Void where prohibited.
Contest ends on 5.9.13 Winner will be chosen by Random.org
Winner will have 48 hours to respond to email or a new winner will be chosen.
Only one winner per mailing address.  Multiple entries will be deleted.
This giveaway is sponsored by the author and ONE eBOOK is available.