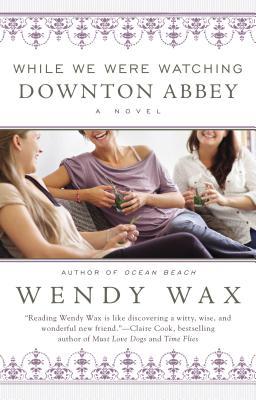 FROM THE AUTHOR OF TEN BEACH ROAD AND OCEAN BEACH, A NEW NOVEL OF FOUR FRIENDS—AND A SHARED PASSION THAT COULD CHANGE THEIR LIVES.

When the concierge of The Alexander, a historic Atlanta apartment building, invites his fellow residents to join him for weekly screenings of Downton Abbey, four very different people find themselves connecting with the addictive drama, and—even more unexpectedly—with each other…

Samantha Davis married young and for the wrong reason: the security of old Atlanta money—for herself and for her orphaned brother and sister. She never expected her marriage to be complicated by love and compromised by a shattering family betrayal.

Claire Walker is now an empty nester and struggling author who left her home in the suburbs for the old world charm of The Alexander, and for a new and productive life. But she soon wonders if clinging to old dreams can be more destructive than having no dreams at all.

And then there’s Brooke MacKenzie, a woman in constant battle with her faithless ex-husband. She’s just starting to realize that it’s time to take a deep breath and come to terms with the fact that her life is not the fairy tale she thought it would be.

For Samantha, Claire, Brooke—and Edward, who arranges the weekly gatherings—it will be a season of surprises as they forge a bond that will sustain them through some of life’s hardest moments—all of it reflected in the unfolding drama, comedy, and convergent lives of Downton Abbey.

As a child Samantha Jackson Davis loved fairy tales as much as the next girl. She just hadn’t expected to end up in one.
Every morning when her eyes fluttered open and every night before she closed them to go to sleep, Samantha marveled at her good fortune. In a Disney version of the airline passenger held up in security just long enough to miss the plane that goes down, or the driver who runs back for a forgotten cell phone and barely avoids a deadly ten-car pileup, Samantha averted disaster in the once-upon-a-time way: she married the prince.
Over the past twenty-five years Samantha had sometimes wished she’d spent a little more time and energy considering alternatives. But when your world comes crashing down around you at the age of twenty-one, deep thinking and soul-searching are rarely your first response.
There was plenty of precedent for prince-marrying in the fairy-tale world. Sleeping Beauty had not ignored the prince’s kiss in favor of a few more years of shut-eye. Cinderella never considered refusing to try on the glass slipper. And Snow White didn’t bat an eyelash at moving in with those seven little men.
It wasn’t as if Samantha had gone out searching for a man to rescue her and her siblings when their world fell apart. She hadn’t feigned a poisoned apple—induced sleep or gotten herself locked in a tower with only her hair as a means of escape. She hadn’t attempted to hide how desperate her situation was. But the fact remained that when the handsome prince (in the form of an old family friend who had even older family money) rode up on his white horse (which had been cleverly disguised as a Mercedes convertible), she had not turned down the ride.
The fact that she hadn’t loved the prince at the time he carried her over the threshold of their starter castle was something she tried not to think about. She’d been trying not to think about it pretty much every day for the last twenty-five years.
Samantha smiled sleepily that early September morning when her husband’s lips brushed her forehead before he left for the office, but she didn’t get up. Instead she lay in bed watching beams of sunlight dance across the wooden floors of the master bedroom, breathing in the scent of freshly brewed coffee that wafted from the kitchen, and listening to the muted sound of traffic twelve floors below on Peachtree Street as she pushed aside all traces of regret and guilt and renewed her vow to make Jonathan Davis happy, his life smooth, and his confidence in his choice of her unshaken.
This, of course, required a great deal of organization and focus, many hours of volunteer work, and now that she was on the downhill slide toward fifty, ever greater amounts of “maintenance.” Today’s efforts would begin with an hour of targeted torture courtesy of her trainer Michael and would be followed by laser, nail, and hair appointments. Since it was Wednesday, her morning maintenance and afternoon committee meetings would be punctuated by a much-dreaded-but-never-complained-about weekly lunch with her mother-in-law.  Which would last exactly one hour but would feel more like three.
Samantha padded into the kitchen of their current “castle,” which took up the entire top floor of the Alexander, a beautifully renovated Beaux Arts and Renaissance Revival—styled apartment building in the center of midtown Atlanta.
When it opened in 1913, the Alexander, with its hot and cold running water, steam heat, elevators, and electric lights, had been billed as one of the South’s most luxurious apartments. Like much of mid-and downtown Atlanta it had fallen on hard times but had been “saved” in the eighties when a bottom-fishing developer bought it, converted it to condos, and began the first of an ongoing round of renovations.
A little over ten years ago Samantha and her prince spent a year turning the high-ceilinged, light-filled and architecturally detailed twelfth-floor units into a four-bedroom, five-bath, amenity-filled home with three-hundred-sixty-degree views and north- and south-facing terraces.
For Samantha its most prized feature was its location in the midst of trendy shops, galleries, and restaurants as well as its comfortable, but not offensive, distance from Bellewood, Jonathan’s ancestral home in Buckhead, one of Atlanta’s toniest and oldest suburbs, where both of them had grown up and where his often-outspoken mother still reined.
The doorbell rang. As Samantha went to answer it she pushed thoughts of Cynthia Davis aside and gave herself a silent but spirited pep talk. She’d married into Atlanta royalty. Her prince was attractive and generous. A difficult mother-in-law and a life built around pleasing others was a small price to pay for the fairy-tale life she led. As Sheryl Crow so aptly put it, the secret wasn’t having what you wanted but wanting what you got. . . .

WANT TO WIN THIS BOOK?
Contest is open to anyone with a US mailing address and ends 4.6.13
Sorry, NO PO Boxes
Winner will be chosen by Random.org  –  Void Where Prohibited.
Winner will have 48 hours to respond to email or a new winner will be chosen
This giveaway is sponsored by the publisher and one copy is available.

Complete the form below!
Follow Me
+1 Follow my reviews on GoodReads HERE
(I am at my limit of friends!)
+1 Follow me on Twitter HERE
+1 Like BookHounds on Facebook HERE
+1 Post about this giveaway on your social networking site and leave me a link here.  You can do this daily and receive an entry for each link you leave.  One per day per site.
Extra Entries for Wendy Wax
+1 Fan on Goodreads HERE