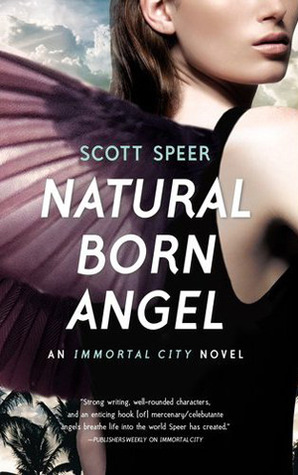 Release date: April 23, 2013 | Series: Immortal City (Book 2)
Life turned upside down for Maddy Montgomery when she found out she was half-Angel and was catapulted into the scene of flashbulbs, paparazzi, and the fervent adulation that comes with being in the celebrity Angel world. She’s trying to juggle her ordinary life—high school, family, friends—with the intense demands of being in the public eye as heartthrob Angel Jackson Godspeed’s girlfriend.

And now Maddy must face the most difficult choice of her life. She’s been offered the chance to become a Guardian. This means entering into dangerous and high stakes training, with no guarantee that she can succeed. But more than that, it would mean leaving her mortal life behind—forever—and allying with the Angels at a time when their relationship with humans is heading for war. . . .

About the Author
Scott Speer is a movie and music video director and a graduate of the University of Southern California’s School of Cinematic Arts. He has worked with Will.I.Am, Ashley Tisdale, Paris Hilton, Jordin Sparks, and other Hollywood personalities, and most recently directed Step Up 4. He is also the author of Immortal City. Scott lives in Los Angeles, California. Visit him online at www.ImmortalCitySeries.com

MY THOUGHTS
REALLY LIKED IT – BOARDING ON LOVE

Maddy is set to go to Northwestern University and is all packed when she has second thoughts after an event (spoiler!) and decides to stay and become a Guardian.  Contacting Jacks to help her through the rough spots, he becomes moody and withdrawn as she becomes a star.  Of course, we are introduced to a new mean girl, Emily, a Downunder mega-angel-in-training as well, since Vivian now has a new boy under her influence and Jacks is damaged goods. Detective Sylvester is sensing some evil presence and with that the bodies are stacking up.  The new president of the USA is ganging up with world leaders to outlaw the angel’s pay for protection service.

While Maddy is in training, she is having major issues with her flying since she is a late bloomer   in the wing department.  Tom, a decorated pilot, is brought in to help her with her issues and faster than you can say “Love Triangle”, things get weird in Angel City.  Jacks is mopey and despondent since he is no longer the center of attention.  It seems that Maddy’s star is shining brighter now and that doesn’t sit well between the two.  Bring in the evil doers and we are all set for a major showdown.   Well, that almost happens, but this one also ends with a major cliffhanger to keep you tuned in for the last (hopefully!) installment.

Well, I had some major issues with this book since I adored the first one so much.  Maddy seemed a bit too into herself rather than being so selfless in the first book.  By the end of the story, the old Maddy is shining through.  I only hope Jacks can recover as much in the next installment.  Tom is an interesting character and between those two boys, there could be some interesting fireworks to come. Parents:  this is pretty much any teen show on television.