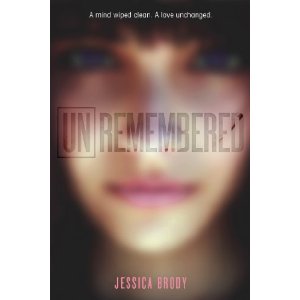 When Freedom Airlines flight 121 went down over the Pacific Ocean, no one ever expected to find survivors. Which is why the sixteen-year-old girl discovered floating among the wreckage—alive—is making headlines across the globe.

Crippled by a world she doesn’t know, plagued by abilities she doesn’t understand, and haunted by a looming threat she can’t remember, Seraphina struggles to piece together her forgotten past and discover who she really is. But with every clue only comes more questions. And she’s running out of time to answer them.

Her only hope is a strangely alluring boy who claims to know her from before the crash. Who claims they were in love. But can she really trust him? And will he be able to protect her from the people who have been making her forget?

From popular young adult author Jessica Brody comes a compelling and suspenseful new sci-fi series, set in a world where science knows no boundaries, memories are manipulated, and true love can never be forgotten.

About the Author
Jessica Brody is the author of 52 Reasons to Hate My Father, My Life Undecided, and The Karma Club, as well as two adult novels: The Fidelity Files and Love Under Cover. Sometimes she wishes her memories could be erased so she could reread all her favorite books for the first time. She splits her time between California and Colorado. Visit her online at jessicabrody.com.

Sera doesn’t remember anything at all when she wakes up in the hospital and she is told she is the only survivor of a plane crash.  Now called Violet because of her eyes, she must learn basic life skills like brushing her teeth but she can do advanced math with her eyes closed.  She can also learn just be glancing at the pages in a book as well as speak languages with no accent.  When a strange boy appears to her and implores her to remember him, she thinks she is truly crazy.  Violet/ Sera is now in the media and shipped off to a foster home where she tries to blend in but the boy won’t leave her alone.  She gets flashes of memories and the boy doesn’t want to leave her alone.  The locket found with her with the inscription S + Z = 1609, must be a clue to who she is.

The first part of this book is a set up for the series to follow and even so it is full of action and not something I wanted to put down.  With her foster brother, Cody, she starts to fill in the blanks and begin to get more and more clues to exactly who she is, so by the end of the book, you are not left with any doubts about where this book is going.  The “Z” on her locket turns out to be a boy she has nicknamed Zen since he gives her peace. The potential for romance across time is one of the best starts I have read in a long time.  Sera had the beginnings of a kick butt character that I can’t wait to get to know better.

There is,  of course, an evil faction that wants to use her for ulterior motives and then Sera who finds herself at their mercy, but not for long.  I really liked Sera and her relationship with Zen is somewhat Romeo and Juliet, since they aren’t supposed to be together but are soul mates who always reunite. Zen is not fully fleshed out yet but I have high hopes for the next book.  I know this reminded me a bit of other Sci Fi young adult books, but the writing is just so very special.  Parents:  a few kisses, some violence, some language but nothing too graphic.