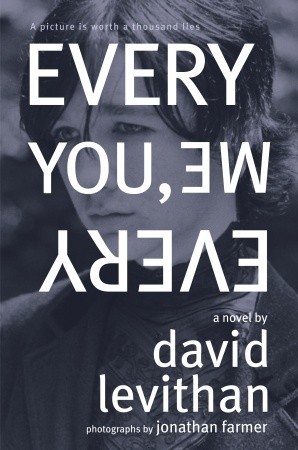 Release date: September 13, 2011
In this high school-set psychological tale, a tormented teen named Evan starts to discover a series of unnerving photographs—some of which feature him. Someone is stalking him . . . messing with him . . . threatening him. Worse, ever since his best friend Ariel has been gone, he’s been unable to sleep, spending night after night torturing himself for his role in her absence. And as crazy as it sounds, Evan’s starting to believe it’s Ariel that’s behind all of this, punishing him. But the more Evan starts to unravel the mystery, the more his paranoia and insomnia amplify, and the more he starts to unravel himself. Creatively told with black-and-white photos interspersed between the text so the reader can see the photos that are so unnerving to Evan, Every You, Every Me is a one-of-a-kind departure from a one-of-a-kind author.

About the Author
David Levithan has taken at least one photograph every day for the past ten years. However, he is much better known for his novels, which include Boy Meets Boy, The Realm of Possibility, Are We There Yet?, Wide Awake, Love is the Higher Law, and (with John Green) Will Grayson, Will Grayson. He’s written three books with Rachel Cohn as well: Nick & Norah’s Infinite Playlist, Naomi and Ely’s No Kiss List, and Dash & Lily’s Book of Dares. In truth, though, he probably spends more time wandering around with his camera than he does sitting at his computer writing. He particularly loves taking pictures of passersby, and New York City is perfect for that. He met Jonathan Farmer because of Jonathan’s likeness to a young Walt Whitman.

MY THOUGHTS
ABSOLUTELY LOVED IT
Ariel is mysterious gone from Evan’s life and in her place are random photographs left behind for Evan. Except the photos are not so random since they seem to be taken at the same spot Evan is standing when he finds them. Each picture is a clue to help Evan unravel the mystery of Ariel’s disappearance. The photographs seem to follow Evan, know exactly where he is going and seem to be placed in just the spots his eyes rest. Evan teams up with Jack, the only other person to know Ariel as well as Evan. This is one story that you must read THROUGH the line as well as between them, since there are strike outs of several words and lines which is Evan’s subconscious speaking out to the reader. These well place clues will have you emotionally attached to Evan as he seeks the truth about his friend. The pictures that appear seem to point Evan in the direction of truth as well.

This unusual mystery directed at teens should thrill adults as well. As the story of what happened to Ariel unfolds, you feel like you are being followed and stalked by the photographer as well. It is seriously creepy. I have mixed feelings about this book. While at times I was intrigued by the method of the storytelling, I did become a bit disenchanted by the strikeouts since it was hard to read. I think I may have to go back and read this one again to understand all of the elements a better.