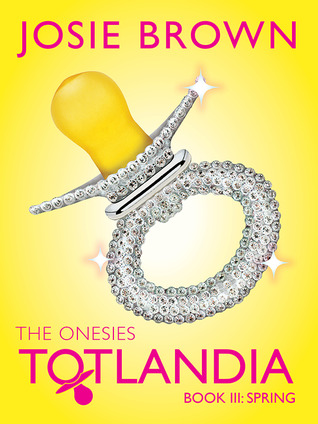 Spring comes in like a lamb as the exclusive Pacific Heights Moms & Tots Club welcomes its newest members. But that tranquility belies a storm brewing, as new tensions and old rivalries come to a head.

The surviving moms are ready to reap the rewards of membership, but none of them counted on club founder, Bettina Connaught Cross, needing a pick-me-up from a bitter betrayal. While lesser women might cry into their pillows, Bettina finds comfort in exerting control over her domain.

With Bettina on a rampage, the new Onesies are trying to stay out of sight long enough to deal with their own issues: Lorna wants to tell her family about Dante’s autism, but keeping it on her own terms could be difficult when her hippie mom and socialite mother-in-law meet for the first time. Jillian fights to regain her financial footing and confront her own insecurities, finding comfort in an unexpected place. And Ally can’t bear the thought of hurting Jade, so she continues to bury her feelings for Brady. But when another desperate housewife stirs the mix, Jade could become a pawn in an even more devious game.

It’s no ordinary spring in Totlandia, as emotions build to a fury and end with a roar.

SECRET LIVES OF HUSBANDS AND WIVES (Simon &; Schuster), which will be made into a dramatic television series for ABC by producer Jerry Bruckheimer.

As a journalist, Josie’s celebrity interviews and relationships trends articles have been featured in Los Angeles Times Syndicate International, Redbook and Complete Woman magazines, as well as AOL, Yahoo, AskMen.com, Divorce360.com, and SingleMindedWomen.com.

For more on Josie, visit her website: josiebrown.com  and her blog: authorprovocateur.com

***spoilers if you haven’t read the first two***

Bettina comes face to face with Kelly and although it has taken her awhile to catch on to her deviousness, she slowly comes to terms with her philandering husband, Art.  I think I have met this character in real life.  Art gives new dimension to the word slimy.  As a financial planner, he relies on Bettina’s club to get him new clients and they never say anything  their losses since his momzilla wife can ruin a reputation faster than you can count on one hand.  Matt and Lorna face the music with their son and his autism after an accident rips open the secret.  Eleanor, Matt and Bettina’s mother has an inkling about the issue and supports Lorna.  She also shocks Bettina by telling her off.  YAY Eleanor! I really want to see more of her.

Jade, the stripper with a heart of gold, is pretty clueless for how worldly she is and Brady manages to save her reputation even though everyone except Bettina knows what she used to do, including Art.  Jillian, is still struggling with her loser of an ex, is stuck with an even worse divorce lawyer, doesn’t really deserve the hand she is dealt.  Ally’s secret still hasn’t come to light even though people are catching on to the fact that she really isn’t married.  She does come to Jillian’s aid and even though it will pay off monetarily for her, she does really just want to help her out.

Just when I think a series can’t get any better, it does!  I planned on just starting the first chapter and then finishing it up in the morning, but I just couldn’t put it down.  Even though, these are quick, serialized reads, Brown has more character development in one sentence that most authors take chapters to fulfill. I adore this style of writing.  It is funny, to the point and brilliant.  These books are just made to read on your smart phone.  So, now, the wait until we get the next one.  I can see these going on and on as more mommies are added into the mix and it will never get old.