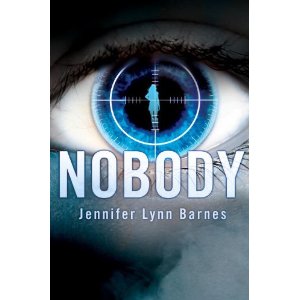 There are people in this world who are Nobody. No one sees them. No one notices them. They live their lives under the radar, forgotten as soon as you turn away.

That’s why they make the perfect assassins.

The Institute finds these people when they’re young and takes them away for training. But an untrained Nobody is a threat to their organization. And threats must be eliminated.

Sixteen-year-old Claire has been invisible her whole life, missed by the Institute’s monitoring. But now they’ve ID’ed her and send seventeen-year-old Nix to remove her. Yet the moment he lays eyes on her, he can’t make the hit. It’s as if Claire and Nix are the only people in the world for each other. And they are–because no one else can really see them.

About the Author
Jennifer Lynn Barnes is the author of the popular Raised by Wolves series. A former competitive cheerleader, teen model, and comic book geek, she wrote her first book at the age of nineteen. She just completed her PhD in developmental psychology at Yale University and has returned to her native Oklahoma to teach at the University of Oklahoma. You can visit her online at www.jenniferlynnbarnes.com or follow her on Twit­ter @jenlynnbarnes.

Claire is used to being ignored, passed over and pretty much invisible.  So when she is almost murdered in her bedroom and makes eye contact with the gunman, she can’t believe she is really the intended target.  The boy with the gun usually gets away unnoticed and he is shocked when he tries again and she stares him down.  No one ever notices Nix and that is part of his skill set and charm.  He soon realizes that Claire is just like him — a Nobody — and she is the most gorgeous girl he has ever laid eyes on.  Claire feels the same way and it is really love at first sight which is pretty amazing considering these two are never noticed at all.

Nix really doesn’t understand why the secret society he works for as an assassin wants this girl gone.  So he does something he has been trained not to:  question authority.  Of course, this sets him on a new life path and he takes Claire with him in order to save her from the Society and their evil plans for world domination.  Of course, Claire readily agrees to go along since no one will miss her anyway. Her parents continually forgot about her throughout her life anyway.

The pair go on a whirl wind of a race to survive the Society and unravel the plans they have to take down Claire and now Nix.  Claire discovers that she is better than Nix at disappearing and learns that being invisible has its advantages.  I really enjoyed this sweet romance built on a bit of a paranormal thriller and mystery.  The pair prove that in being nobody they are unique and someone. I found this stand alone just a true treasure and would really enjoy reading about Claire and Nix again in the future.   Parents:  There is some kissing, cartoon violence and some language.