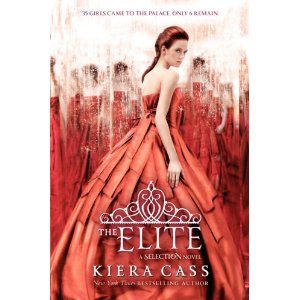 The selection began with 35 girls. Now, with the group narrowed down to the Elite, the competition to win Prince Maxon’s love is fiercer than ever. The closer America gets to the crown, the more she struggles to figure out where her heart truly lies. Each moment she spends with Maxon is like a fairy tale, filled with breathless, glittering romance. But whenever she sees her first love, Aspen, standing guard, she’s swept up in longing for the life they’d planned to share.

America is desperate for more time. But while she’s torn between her two futures, the rest of the Elite know exactly what they want—and America’s chance to choose is about to slip away.

About the Author
Kiera Cass is a graduate of Radford University and currently lives in Blacksburg, Virginia, with her family. She is also the author of the New York Times bestseller The Selection and the self-published fantasy novel The Siren. Kiera has kissed approximately fourteen boys in her life. None of them were princes.

SOURCE:  AROUND THE WORLD ARC TOURS
MY THOUGHTS
LOVED IT
The Selection has been whittled down to six girls and named The Elite. Aspen is guarding America’s door and quite possibly her heart from Maxon and threats from  the rebels.  Poor America is so darn confused, she is unsure which way to turn since both Maxon and Aspen offer her each something different.  Unfortunately, America must decide and decide soon.  Also every time I give up on Maxon, he redeems himself — sigh — no, big, giant SIGH.  And then there is Aspen and while I think he is perfect for America, there seems to be that little something missing between the two.  Where he is strong and steady, Maxon always keeps her guessing.
So the game continues and Maxon still professes his love for America but has to have a back up plan in case something goes wrong between the two.  The rebels attack and cause death and destruction within the palace walls and the pair are locked into a safe room where more secrets are divulged.  As America gets to know Maxon better, she loves him even more. Aspen understands the game and waits somewhat patiently for this whole thing to be over.  There are a few shocking events which I don’t want to spoil.
Overall, this is a great second book in a trilogy.  There are a few twists, but nothing outlandish and although I was left upset a bit by America’s inability to make up her mind, the end more than makes up for it when she does figure out her purpose.  I can only image that the finale in this series is going to be exciting given the direction this one goes in.  Parents:  there is some kissing, a bit of violence and overall a pretty clean read.  So, now another year long wait for the conclusion.